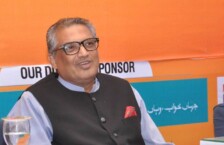 A recently published book by senior journalist Suhail Warraich was removed from book stalls within hours of its arrival. The book, ‘Yeh Company Nahi Chaley Gi’ (which translates to: “This company will not work”), is a compilation of Warraich’s columns already published in daily Jang and on BBC Urdu.

Pakistan Press Foundation (PPF) is concerned with the confiscation of the book by Warriach. Tactics such as seizing copies of a prominent journalist’s book act as a tool of intimidating the media and further leading to a limiting of press freedom and free expression in the country.

The development comes amidst a crackdown on Pakistani journalists. In the past few days, three journalists have had criminal complaints lodged against them for allegedly posting anti-state content on social media.

Speaking to BBC Urdu, Warraich said that the content of the book is previously published columns. He said that he found that “some circles” have objected to the book’s title page. “Yesterday, I was also contacted and told that the cartoon on the title page undermines the dignity of the prime minister,” he said.

Warraich said that he did not think that there was anything objectionable in the cartoon on the title page of the book. He said that cartoons are made in a “light mood” and they are always seen in a “light manner”. “But despite this, late at night, on the insistence of a lot of my friends and groups, we removed it from Twitter.” He added that they will change the title page of the book.

The controversial book cover features a cartoon showing Chief of Army Staff General Qamar Javed Bajwa sitting on a chair and Prime Minister Imran Khan playing on the floor besides him with a ball and a doll. On one side of the cover, leading opposition leaders — former Prime Minister Nawaz Sharif, former President Asif Ali Zardari, Pakistan People’s Party Chairperson Bilawal Bhutto Zardari and Pakistan Muslim League-Nawaz Vice President Maryam Nawaz —peering in from the window.