Over 130,000 women in Bajaur deprived of voting right 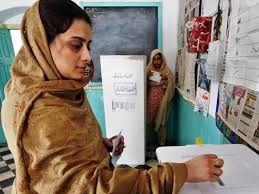 KHAR: Only 2,800 women voters were able to cast their vote in the two National Assembly constituencies of Bajaur Agency in May 11 general election despite assurance of the candidates to the Election Commission of Pakistan that they would allow the women to exercise their vote right.

An ECP official told Dawn here on Thursday that the turnout of women voters in NA -43 and NA-44 remained less than three per cent, which was a matter of disappointment for the commission. At least 130,827 women have been deprived of their right to vote.

“We expected the turnout of women voters could be over 10 per cent as the political and religious parties and their candidates had promised before the polling day that they would allow the women to cast their votes in the election,” the official said and added that the parties did not fulfill their commitment.

He said that the ECP had received reliable information that tribal elders, religious and political leaders and some of the candidates were equally involved in stopping women from voting.

“We have brought the issue into the notice of local administration and proper investigation would be launched soon,” he said.

Sources said that most of women votes of NA-44 were polled in Barang and Salarzai tehsils. They claimed that PML-N candidate Shahabuddin Khan who emerged as winner played a role in encouraging the women to cast their vote. They said that all the candidates contesting the election for NA-44 except Badam Zari and Mr Shahab had opposed polling of votes by women.

Meanwhile, a human rights activist has urged the ECP and local administration for launching an inquiry into stopping of women from exercising their vote right.

“Women form half of the agency’s population and play vital role in development of the region, but unfortunately they have been deprived of using their right to vote,” said Habibul Hassan, agency coordinator of Human Rights Commission of Pakistan.

He urged the ECP to take serious notice of the issue and ensure exemplary punishment to those involved in depriving the women of their constitutional right.