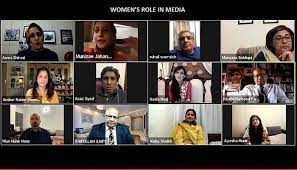 BRUSSELS: Providing women with equal opportunities in the media industry is the need of the hour, senior journalists concluded at a virtual roundtable on “The Role of Women in Media”.

Speaking at the webinar, senior journalist and TV anchor Asma Shirazi said that women should be prepared before they step into the field of media. “Preparing them mentally beforehand is important because they will face all kinds of problems and challenges,” she said, adding that women should be “recognized for their status, skills and abilities.”

Comparing the Pakistani media industry with those abroad, leading journalist, TV anchor and filmmaker Munizae Jahangir said that women face more problems in Pakistan as compared to the rest of the world.

As a counter, she suggested that women work hard to showcase their talent. Jahangir added: “Particularly, we must fight for our rights.”

Senior journalist and columnist Munazza Siddiqui agreed with her fellow speakers and said that women who want to work in the media industry should “increase their knowledge”.

The columnist elaborated by saying that this will be their “strength”, and help them achieve honorable positions in this field.

Expressing his views during the webinar, prominent journalist, columnist and author Sohail Warraich, said that his feelings are no different than the position held by women. He said that “any man who oppresses, coerces, harasses and exploits women is a criminal”.

Shamsi said: “The voice of these steadfast women, who make place for themselves through hard work, becomes even stronger.”

“These women become role models not only for individuals but for the society as a whole,” she said.

Azaz Syed, a senior journalist, author, columnist and a correspondent of Jang and Geo News, while participating in the webinar directly from Afghanistan said: “Women are not given equal opportunities in our mainstream media.”

“In my view, women are better than men in terms of their abilities, skills and hard work,” he added.

Shedding light on the work environment, TV anchor Nadia Naqi stated that women were “abused before as well” but now with the advent of social media “it has increased more so”.

“When we express our opinion, trollers start attacking our caste and character,” she lamented.

Expressing his views, this correspondent said: “We salute all brave women in the media industry who are steadfast in carrying out their professional responsibilities in spite of all adversities.”

This correspondent added that it is because of these brave women, “we men get also get courage.”

At the outset of the webinar, PPP Gulf Middle East President and OPUF Chairman Mian Munir Hans said: “The role of women in our society cannot be ignored.”

He reiterated his commitment to stand by women to uphold their status in society and for their empowerment in all walks of life.

Moderating the session, renowned poet Ayesha Sheikh Aashi said that liberated and progressive men play an important role in the success of women.