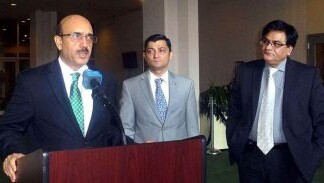 UNITED NATIONS: “Those who deny women and girls their right to education, violate Islam,” Pakistan’s UN Ambassador Masood Khan told an audience at the world body on Monday. He said the religion was for all men and women without discrimination.

He observed that the terrorist attack on Malala Yousufzai showed that “the forces of darkness” were afraid of the education that gave courage to girls to stand up for their rights.

“Those who do so (deny girls’ education) violently, violate the right to life and the right to education,” he said while addressing a Unesco-sponsored discussion on the “Importance of education and sports in preventing gender-based violence” held at the UN Headquarters on the sidelines of the current session of the Commission on the Status of Women.

The Director-General of Unesco, Irina Bokova, presided. Emphasising that education is enlightenment, emancipation, empowerment and development, Mr Khan said Pakistan had always given priority to education for girls and boys, for men and women.

“In education lies the redemption of a nation and the entire international community. The attack against Malala was as evil as it was showed that the forces of darkness are afraid of the education that gives courage to girls as young as Malala to stand for their rights against all odds,” the Pakistani envoy added. He said Pakistani women parliamentarians, with the support of all political parties, were creating new legislative and administrative space for women’s education.