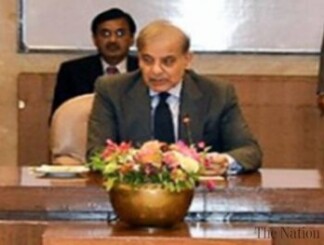 ISLAMABAD – The major opposition parties on Friday took a hard stance over the appearance of NAB (Lahore) DG Saleem Shahzad in talk shows, terming it an attempt to influence the cases against members of the National Assembly.

The opposition jointly moved a ‘question of privilege’ in the National Secretariat and then raised the matter in the middle of the proceedings, demanding the chair immediately proceed on it.

The speaker however sought time for proper consultation before taking any action on the motion.

The PTI government, in its quick response, termed the ‘question of privilege’ against the constitution and an attempt to influence the NAB investigations.

Information Minister Fawad Chaudhry reminded the opposition that it was actually Opposition Leader Shehbaz Sharif who initiated this process of talking publically about a sub-judice matter when he spoke about his investigation in the house.

On Friday morning, the opposition moved the ‘question of privilege’ saying that NAB Lahore DG “with the consent of NAB chairman” appeared on TV talk shows including Kamran Khan’s program on Dunya TV, Kashif Abbasi’s ‘Off the Record’ on ARY TV, Nadeem Malik’s show on Hum TV, Shahzeb Khanzada’s program on Geo TV and Awaz program on Samma TV.

Saleem Shahzad “has conducted a media trial of opposition members, attempted to influence the so-called cases against members of the National Assembly, provided details of the matters that are sub-judice, revealed details of confidential and secret NAB documents and maligned the reputation of the members of the parliament”, according to the motion.

PML-N senior lawmaker Shahid Khaqan Abbasi, on point of order, requested the chair to proceed on the question of privilege moved by the opposition.

“On the direction of Chairman NAB, one official is influencing the NAB proceeding which is a sheer breach of privilege,” said the former prime minister, asking the chair to take action on it.

“We are in favour of accountability but not by those who allegedly possess fake degrees,” he said, terming it a breach of privilege of all members.

PPP’s Naveed Qamar, supporting the concerns raised by PML-N, said that this amounted to insult to all the members of parliament.

“It was not just answering of questions raised by media persons; rather, the NAB official himself appeared in different TV programmes,” he said.

Another PML-N senior lawmaker, Rana Tanvir was of the view that the “dare” shown by speaking in TV programme was not possible without a proper “backing”.

National Assembly Speaker Asad Qaiser reserved his ruling, saying that he would take action after consultation over the legal aspects of the issue.

Information Minister Fawad Chaudhry, responding to the concerns raised by opposition, said this ‘question of privilege’ would be tantamount to influencing the NAB investigation.

“It is against the constitution…The opposition wants to use it as a tool to influence investigation,” said the minister, adding the law would treat all in the same way.

Chaudhry further said that opposition leader Shehbaz Sharif had initiated it by sharing his ‘trial’ in the house. He quoted the speech of Opposition Leader in the National Assembly, which he delivered in the previous session.

The minister said even Law Minister Faroogh Naseem had pointed out that the discussion on ongoing cases was not legally allowed. “Law will be equal for all… It cannot be changed,” he said.

The 4th session of the National Assembly remained in session for two weeks, prorogued without concluding debate on ‘current economic situation in the country’.

The house in last two weeks also could not resolve the pending matter about the formation of the standing committees of National Assembly and Public Accounts Committee (PAC).

Prime Minister Imran Khan missed all the proceedings of the fourth session.

Leader of the Opposition Shehbaz Sharif attended all the proceedings of the National Assembly under the ‘production order’.

Shehbaz, who is also president of Pakistan Muslim League-Nawaz, is currently in the NAB custody in connection with Ashiana Housing Scheme scam.

Dawn: Opposition lashes out at NAB in NA over ‘media trial’

The Express Tribune: Opposition furious over ‘media trial’ of MPS