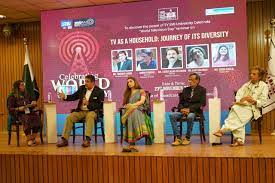 KARACHI: Marking the World Television Day on Tuesday, the panels comprising renowned actors and broadcasters have lamented that content and news programs produced by Pakistani TV have so far failed to reflect the true picture of the society, ARY News reported.

The day organized by the Sindh Madressatul Islam University (SMIU), as it marked the day by holding panel discussions of TV journalists and vateran actors each, concluded unequivocally that the evolution of our TV may not have fared well as of yet.

“Our dramas were appreciated and copied by others in past. They had content. They had acted,” said actor Tanveer Jamal while talking on the panel titled: TV as a household.

He added, “Our focus was on the subject, its content and dialect but it has been changed now,” he added.

Separately in talks titled ‘Evolution of Television’, renowned journalist Mazhar Abbas said that the content which is being produced reflects a certain part of the society. “We have progressed well technologically but descended intellectually,” he said.

Abbas said that the founder of Pakistan was in support of freedom of expression but he lamented that the ministry of information itself is playing the role of peddling disinformation.

The event, organized by SMIU directorate of broadcasting and media training, raised questions that there are people who could generate better content but the question is if the people really want to see that?

One panelist, broadcaster Najia Ashar, also concluded by raising concerns over place of women in the media and their acceptance for them.