ISLAMABAD: Interior Minister Chaudhry Nisar Ali Khan has taken serious notice of a media report which stated that a candidate for local government (LG) polls – who belongs to Kot Momin, a town in Sargodha district, Punjab – was declared as ‘deceased’ as per the record of the National Database Regulatory Authority (Nadra).

Chaudhry Nisar called for an explanation from chairman Nadra.

According to the report submitted to the interior minister, the wife of the said person had obtained his death certificate from the concerned union council (UC) in 2011.

Since union councils maintain birth and death records in those localities, therefore, Nadra had also updated its record accordingly.

The updated list was sent by Nadra to the Election Commission of Pakistan (ECP) for verification. As per the SOP, the list was displayed for the public information.

Since no objection was received on the updated list, therefore the list was considered as final and was issued by Nadra. According to Nadra report, the wife of the said candidate had also obtained her CNIC indicating her marital status as widow.

In light of these facts, the interior minister has asked the Punjab government to take strict action against the officials of the union council and those who were involved in forgery and fraud.

Meanwhile, the interior minister also took notice of a media report which said that two lawyers have allegedly deprived a legitimate owner of his property in Sadar, Karachi through forged documents.

Taking notice of the report, Chaudhry Nisar directed Federal Investigation Agency to collaborate with National Accountability Bureau and undertake joint investigation into this reported incident, said a statement issued by the ministry of Interior. 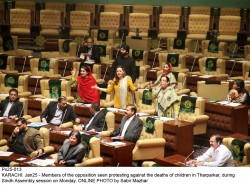