Of a newspaper and trains -Pakistan Press Foundation (PPF)

Of a newspaper and trains 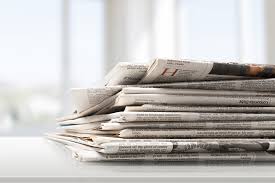 When I first started writing my Sunday piece, I did so because of a treasure trove of experiences, while travelling through the length and breadth of my homeland and abroad. My love of writing was inspired by three people – the Noble Laureate Rudyard Kipling, whose works have the place of honour in my personal library; Art Buchwald, whose columns, laced with incomparable satire, were read and reread by me as early as my teens, and last but not the least, the man who taught me the art of storytelling – my English Language teacher, the late Mr Alonso (a member of the Royal Shakespearean Society). I am happy in the knowledge that I have managed to pass on this love of putting words on paper to at least one of my male offspring, who writes better than I do.

It was somewhere in the early nineteen sixties that a classmate of mine, with amazing creative skills suggested that we team up and publish a weekly newspaper for distribution within the school. I readily agreed, as my short pieces were already being published in the school magazine since the late fifties. The composition and artwork were done by my partner and editor, while I did some of the written work. We scrounged single lined sheets of paper and painstakingly used our fountain pens to produce content and copies. I cannot vouch for the newspaper’s schoolwide popularity, but it was read with much criticism and sometimes derision by our classmates. It was on the eve of our class Golden Jubilee celebrations many years ago that I came upon a copy of this journalistic endeavour, in a box containing old, forgotten documents. Filled with nostalgia, I had the paper photocopied and took it with me to the Jubilee Dinner, where I presented it to my ‘co-Editor’, who was now a retired senior banker, much to everyone’s amusement.

My family and friends tell me that I am an unsocial individual. I may not agree with how I am viewed, but I respect all opinions since I do not consider reading, exploring untrodden trails (in the literal sense), writing, a passion to interact with animals and spoiling grandchildren as indicators of being unsocial. I don’t like loud and meaningless conversations, avoid boisterous parties and hate air travel (even though I cannot avoid it).

Talking of travel, one of my favourite means of fast locomotion is the train, although I haven’t tried one for ages. There is an early memory of a rolling and pitching compartment with leather seats that could be unfolded to form beds. We were forbidden to stick our heads out of the wooden framed sliding windows since burning coal embers spewed by the steam locomotive could do serious and painful damage, if one lodged into the eye (coal was soon replaced by furnace oil, but the ban on leaning out continued).

The best part of the train journey was a meal in the dining car. One had to walk through other compartments to reach this travelling restaurant. This passage was an adventure in itself as one had to step across two swaying and pitching steel plates that bridged the gap between ‘bogies’. There was a time when the interior of the dining car was opulent with spotlessly white table cloths, starched napkins and liveried staff. In the fifties, the menu was European (a legacy from the ‘Raj’ era), which included chicken cutlets and bread slices but was altered later to include ‘desi’ food.

We could order food in our compartment too. This was delivered by an amazing and fearless ‘band of beras (read bearers)’ or waiters, who were great acrobats. They balanced half a dozen trays of food on one hand and hopped from compartment to compartment with the train moving at top speed. This later became the only means of a mobile meal service, when dining cars were abolished. I am happily told that the traditional moving restaurant has been restored in some trains.

A train journey necessitated stopping at stations en route, since passengers had to be dropped and picked up, and coal, oil and water had to be replenished. In some cases, even drivers were changed. The advent of air conditioning, the diesel and then the electric locomotive brought about far reaching changes in train culture. Now fast nonstop trains have compressed time and provide almost the same comforts as passenger airliners. I sometimes fleetingly feel that this has perhaps deprived people of getting down at each station and seeing new places and meeting new people. The bottom line, however, is that trains (no matter how much they have changed), remain an exciting way to travel and see the country on the go. Do try it next time you decide to undertake a journey.