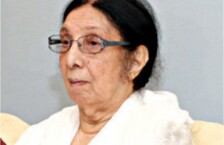 LAHORE: Eminent novelist Nisar Aziz Butt passed away here in the early hours of Friday. She was 93.

According to information provided by a member of her family, Nisar had suffered a stroke on Sunday night. She passed away peacefully at Fajr time, surrounded by her sons Ashar Aziz and Ahmar Aziz Butt, brothers, grandchildren and nieces and nephews, said Rameeza Nizami, the CEO Nawa-i-Waqt Group and Nisar Aziz’s family member.

She has four novels to her credit, namely Nagri Nagri Phira Musafir (The Traveller Wandered From Land to Land), Nae Chiraghay Nae Gulay (No Lamp, No Flower), Darya Kay Sang (The Stones of the River), and ‘Karavan-i-Wujood’ (Procession of Existence). She published her autobiography, Gaey Dino Ka Suragh (In Search of Days Gone By). She wrote columns for The Pakistan Times and Dawn that were published in the book form under the title of Prelude.

Nisar’s mother passed away when she was seven, after which she spent her next three years with her maternal grandparents where she saw her grandmother as a powerful figure in the family. After some time, her father remarried and had five other children from his second wife.

During her youth, she contracted tuberculosis but never let any of her life’s difficulties overpower her. She was undeterred in her resolve to overcome the illness, which she did.

Nisar’s mother tongue was Pashto though she always chose to write in Urdu and English but spoke Farsi at home. She also knew French. Her 250 diaries have all been stored on CDs.

In her homeland, formerly known as the North West Frontier Province (NWFP), girls’ education was in a miserable state but she managed to receive first position in matriculation and later a first position Master’s degree in Mathematics from the University of the Punjab. She started writing during her college days.

Nisar’s first novel was published in 1955. Around that time, she met Asghar Butt, also a literary personality in his own right, and soon they were married.

Later Nisar Aziz took up a job in Peshawar where she also joined Radio Pakistan and met the likes of Noon Meem Rashid who worked there.

It is said the manuscript of her first novel was sent to Mirza Adeeb who said she would receive Rs300 for it. It was a large sum but she had reportedly received only Rs21.

“She was also the matriarch of our family and the centre of gravity around which we all revolved. We received a huge amount of love from her. She was our confidant, a mother figure to us all. We will miss her dearly.”

Nisar Aziz’s brother Sartaj Aziz, the former minister and the PML-N leader, who is also regarded as an eminent personality in his field, told Dawn , “Nisar was a remarkable sister with a heart of gold and brilliant mind. She lived a full life and used her talents and personal qualities to enrich the lives of many. All her writings reflect extraordinary sensitivity and insights. She will always live in our thoughts, and will forever be with us through her books and precious memories”.

Novelist Aamer Hussein described Nisar’s work as difficult and challenging but not excessively so, adding that her work was experimental by chance, because the material demands it should be.

“At times, her sentences can indulge in philosophical gymnastics, but neither pretty nor obscure prose is ever the point of her writing,” he wrote in a column.

“In a culture that thrives on short fiction, she has concentrated exclusively on the novel. She’s both known and admired; her work a subject of academic theses.”

After her four novels, she disappeared for two decades to explore her life and times and reemerge with her memoir.

Nisar herself often alluded to influence from German philosopher Spengler, and how she adapted his theory of the decline of western civilization and applied it to the end of the Raj.

Conflicting paradoxes and juxtapositions between many themes including modern and the traditional, the eastern and the western, and the masculine and the feminine are common in her writing. She also echoes Proust and Tolstoy in her work and has used existentialist and postmodern themes familiar from Camus and Nabokov.