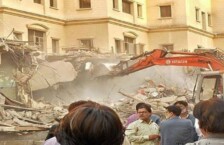 SIALKOT – As many as nine popular cinema halls have been demolished in various parts of Sialkot City during the last few years due to prolonged financial crisis, lowering number of cine-goers, and unbearable burden of taxation by the government.

The owners including Khan Iqbal, Bashir Ahmed and Usman said that these cinemas were demolished during the last few years as they were suffering from multiple problems due to non-screening of the films. They said that the number of cine-goers was reduced to a great extent due to advancement in information technology and internet services, and the spread of local cable networks.

The owners said that these cinemas houses were in continuous heavy financial losses with overburdened taxation by the government.

Owner Usman said that these were popular cinema houses in Sialkot, and they provided entertainment to thousands of visitors belonging to Sialkot, Daska, Sambrial, Pasrur and surrounding areas, but they had lost their attraction to the visitors in advanced era of technology.

Two neighbouring cinemas – Shama and Parwana – were also striving for their survival by screening Pakistani, English and even Indian movies to attract the people. While, the rest two Lalazar and Rim Jhim were almost closed due to the feeble number of visitors.

Same situation is in Daska City. There were only two cinemas namely Afshan and Tasweer Mehal in Daska City, and both of these cinemas’ buildings have been demolished by their owners due to great financial losses. Shopping plazas and centres have been established on the demolished buildings of cinema halls.

A Daska-based senior cine-goer Jamil Sethi expressed grave concern over this critical situation. He urged the government to take notice of the situation and patronise cinemas.