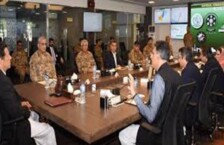 Additionally, the forum was informed about steps being taken for standardizing and assisting provinces on health facilities by sending special teams led by Dr Faisal Sultan and establishment of a helpline for FLHCIN was also discussed. Minister for Planning Development Reforms and Special Initiatives, Asad Umar chairing the NCOC meeting mulled over projection of markets and industries complying with SOPs amid strict enforcement to encourage the masses to follow safety guidelines.

Speaking on the occasion, he appreciated the provincial chief secretaries, MoIB and ISPR for effective media campaign highlighting the stringent efforts made by the government to implement SOPs at the grassroots level. He said, “We should continue to hammer SOPs compliance among the masses whereas the positive outcome of enforcement should also be projected at the forum and media”. It was suggested that the provincial chief secretaries should take the opportunity of traders associations contacting with media to make them realize their self-responsibility for implementing the SOPs in the markets. He mentioned that the government had a two-pronged strategy focusing on disease spread control and upgrading the healthcare system.

ISPR official briefed the forum that complete information sharing was carried out from the highest tier of the government to the lowest one whereas SOPs compliance data would flow from bottom to top. The prompt data sharing from the provinces was appreciated and the efforts made by Khyber Pakhtunkhwa and Islamabad Capital Territory administration was lauded for ensuring strong implementation of SOPs on the ground.

Special Assistant to Prime Minister on Information and Broadcasting (SAPM) and Chariman CPEC Authority Lieutenant General (R) Asim Saleem Bajwa said there was a need to create balance in the enforcement and avoid creating panic among the masses. He added that ground level engagement with masses would help improve the impact of SOPs compliance.

The SAPM also suggested the provinces to share their positive success stories with the ministry for better media projection and coverage. The provincial chief secretaries including that of Gilgit Baltistan and Azad Jammu and Kashmir apprised the forum on action taken for SOPs compliance and smart lockdowns implemented in the areas with maximum COVID-19 cases reported.

Chief Secretary Punjab informed the forum that other than Lahore, hundreds of shops were sealed in Faisalabad, Rawalpindi and Multan whereas the City Traffic Police actively engaged with the masses to create awareness on wearing masks and also about the fine upto Rs2,000 that was to be imposed on the violation of the safety protocol.

Chief Secretary Balochistan told the forum that around 3,800 shops were sealed across the province on SOPs violations. Chief Secretary Sindh mentioned that there was positive impact of media campaign on SOPs compliance where strict warning notices were issued to markets and shopkeepers on violating SOPs.

Chief Secretary Khyber Pakhtunkhwa said that around 25,000 information and education pamphlets and banners were displayed on ‘No mask no service’ whereas undertakings to comply with SOPs were received from the traders before opening markets.

Chief Secretary Gilgit Baltistan informed that around 440 shops were sealed and 1,000 people were fined on violation of SOPs, whereas 8 smart lockdowns were implemented in the areas with large number of COVID-19 cases. Chief Secretary AJK noted that ‘No mask no service’ was in place in the province since May 10 for effective SOPs compliance, according to the officials.

According to the officials, 15,459 hospitals in the country has been linked under this system. The provinces will be able to review facilities available at the hospitals falling under their area. Pak Nighban app has also been launched. This will provide information about the availability of ventilators. Around 1,110 hospitals in Pakistan had been linked with this app, said the officials.