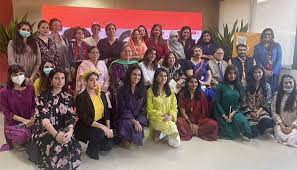 The cell has been established at the NCHR in collaboration with the Digital Rights Foundation (DRF) and the Centre for Excellence in Journalism (CEJ).

The launch took place following a consultative meeting held with Pakistani women journalists from across the country.

NCHR’s Chairperson Rabiya Javeri Agha announced the launch of the complaint cell which will be dedicated to resolving human rights issues that arise from the targeting of women journalists, to ensure the freedom of the press.

“Freedom of the press and freedom of the media are cornerstones for any functioning, successful democracy,” she said, after announcing the launch of the complaint cell.

During the meeting, female journalists shared their concerns and discusses challenges they encounter on a daily basis.

In her keynote speech at the event, NCHR’s Rabiya Javeri spoke about online violence and harassment, deeming it as one of the “biggest challenges in online spaces” and lamented how women journalists report on critical issues face increased risks of attack and censorship.

DRF’s Nighat Dad also reiterated her view stating that online spaces are increasingly becoming hostile for women journalists and women in general. Dad also pointed toward the ways in which online freedom of expression has been negatively impacted including legal restrictions, extra-judicial excesses, online violence and harassment, monitoring, and gendered disinformation against women journalists.