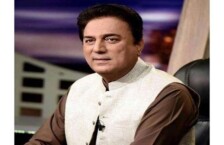 LAHORE: The appointment of senior lawyer Naeem Bokhari as director and chairman of Pakistan Television Corporation (PTVC) has been challenged before the Lahore High Court.

The petitioner, Usman Ghani, mainly argues that the impugned appointment has been made in violation of the Supreme Court judgments. He said the government appointed Bokhari, who is 65 years of age, as the chairman without advertising the post as mandatory under the law and the guidelines set by the superior courts.

He alleged that no proper meeting of the board of directors of the state TV was held in accordance with law to appoint the respondent/director as the chairman rather simple direction was given by the prime minister to convene a board meeting to elect the respondent. The petitioner contended the illegal appointment of the respondent as a director and the chairman for a period of three years was undertaken in a systematic and methodical manner beginning from the special exemption given to him from upper age limit of 65 years for the appointment of heads of autonomous bodies.

The petitioner pleaded that the whole process for the impugned appointment started and ended with the name of the respondent, therefore, was a person-specific. The petitioner implored the court to declare the appointment of Bokhari as director and the chairman of the PTVC null and void and direct the government to appoint a regular incumbent strictly in accordance with law. Justice Shams Mahmood Mirza took up the petition Monday; however, he adjourned the hearing for want of necessary documents.