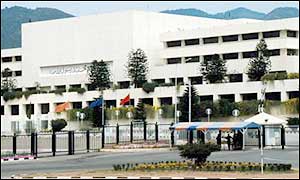 ISLAMABAD: A sub-committee of National Assembly’s (NA) Standing Committee on Information, Broadcasting and National Heritage, Monday decided to finalise the much-awaited code of conduct for electronic media (e-media) in its meeting on April 15.

The committee that met under its convener Arifa Khalid Parvez asked the Ministry and Pakistan Electronic Media Regulatory Authority (Pemra) to hold a meeting with Pakistan Broadcasters Association (PBA) in coming few weeks.

The forum held deliberations on the proposed code of conduct for both, Pemra and PBA. Moreover, Pemra was asked to try to settle issues relating to the code of conduct with PBA within the stipulated period.

The sub-committee was informed that Pemra had prepared a draft, a code of conduct before 2013 general elections and it was presented in the Supreme Court. It was appreciated but set aside on technical grounds.

The NA panel was told that the draft was prepared after thorough consultation with the stakeholders and the recommendations from Fakhruddin G Ebrahim Commission were also incorporated in the draft.

A presentation highlighting main points of the draft of code of conduct was also given to the sub-committee. Pemra apprised the parliamentary committee that there’s ban on telecasting the statements made by banned outfits and anti-nation elements.

Likewise, no content against the judiciary and armed forces could be telecast.Moreover, obscene content and the talk shows depicting religious and ethnic bias cannot be telecast, Pemra stated.

It was said that Pemra acquainted its licence-holders frequently through its guidelines, circulars and warnings.Parties from electronic media told Pemra that each organisation had formed a monitoring committee for implementing the guidelines.

The parliamentary committee was told that previous year, two private television channels were asked to safeguard national security and sovereignty in the best national interest.A sub-committee member, Naeema Kishwar Khan opined that there were several violations of the code of conduct committed by various TV channels without any check.

She referred to different talk shows and video clips pertaining to terrorism and other forms of violence that took place in the society. Secretary Information and Broadcasting Dr Nazir Saeed said that the regulations draft prepared by Pemra was good but the Ministry needed the guidance of the standing committee for its implementation.

With regards to the Council of Complaints of Pemra, he said that it was operational but it could be reconstituted if there were any objections on its performance.However, the sub-committee asked Pemra to give a presentation about the performance of the council of complaints during past three years with special focus on the year 2013.