Muse in the museum

The Lahore Museum is having a show “Woman O Woman” (which will remain open till March 31, 2013) to celebrate the International Women’s Day. The show comprises artefacts, statues and paintings from the Museum’s own collection. A number of paintings by Amrita Sher-Gil, B.C. Sanyal, Zainul Abedin, A. R. Chughtai and Shakir Ali are displayed as well. Next to works which have women as a subject are paintings by important female artist like Anna Molka Ahmed and Zubeida Agha.

Here, women are portrayed across civilisations, cultures and periods, and in different roles — from a vehicle for fertility to a symbol of courage, motherly love, romance and divinity, and much later as embodiment of beauty and attraction. This is mainly because women have mostly been rendered by male artists as an extension of their own concept of womanhood, rather than as an independent and equal gender.

It is not surprising the women are painted, sculpted and drawn much more than men in the history of art. The man, instead of focusing on his body, was more attracted to his ‘Other’; so the female form emerged as the main motif in the aesthetic tradition across centuries and cultures. Yet this concentration on women was not devoid of its political and social dimensions. Since man started to dominate from an early stage in human history, his mode of making the woman — mother, sister, wife, lover, daughter or stranger — was considered the valid, if not the sole, scheme.

This practice extended from the realm of visual art into cinema where male directors and producers showcase women as signs of love, lust and longing.

It is ironic that in our culture, the treatise for a woman on how to live an ideal married life was written by a man, Maulana Ashraf Thhanvi, the author of“Baheshti Zewar”, a book that was considered an essential component of a Muslim girl’s dowry till some decades ago in India and Pakistan. In literature, women were compelled to adopt male names or some connection with the male to get their creative expressions accepted; George Eliot in English and Bint-e-Nazr in Urdu are just two examples.

With the twentieth century came the rebellion and, like in other spheres, women artists claimed their rightful place and became a significant part of visual arts. In our country, during the military dictatorship of Zia ul Haq, subjugation of women was done in the name of religion and morality. Female representation, especially the nude, was prohibited.

To retaliate against this code of conduct, women artists exhibited frequently in private galleries. In their pursuit, a particular emphasis was put on the portrayal of woman’s naked body. A number of female artists (Sumbal Nazir, Salima Hashmi, Nahid Raza) deliberately used this image as the emblem of gender and the freedom of expression. It was indeed a courageous endeavour since it invited a great level of hostility from the state and some sections of the public. Ironically, their efforts to express their rights and voice — in the form of naked female body — echoed the male fascination with female nude. On the surface, a painted figure of Sumbal Nazir could hardly be separated from a canvas by Jamil Naqsh or a painting by Colin David, on the same theme.

Thus, even in their strive against male dominance, some of our female artists were forced to adopt the vocabulary devised and preferred by male artists. This was soon realised and soon the practice was abandoned. After that, we enjoyed a period in Pakistani art in which difference of genders became a minor detail, as artists were pursuing other issues. Feminism in art, too, is now appreciated and approached for its academic significance and value only.

In this context, the exhibition at the Lahore Museum offers a rare opportunity to see women and their presence in art, with a fresh view, even if we are looking at the Mother Goddesses made five thousand years ago or a sculpture of Athena, no less than thousand years old. 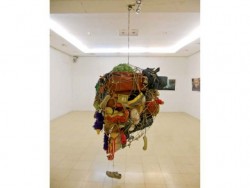 In praise of art 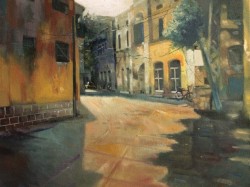