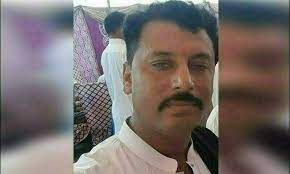 The Nazim Jokhio case took a dramatic turn on Saturday when his mother approached a sessions court and denied having reaching any out-of-court settlement over her son’s murder with an interned Pakistan People’s Party lawmaker Jam Awais Bijar and others.

“It is most respectfully prayed in your honor that I did not compromise with the accused persons, as earlier filed compromise due to pressure/influence by the accused persons. Same may kindly be treated as null and void and same has been withdrawn by me,” stated the 52-year-old mother Jamiat in an application filed through her counsel Mazhar Ali Junejo.

The mother’s application has been filed with the court of Additional District and Sessions Judge (Malir) Faraz Ahmed Chandio, who was set to formally indict the detained MPA Jam Awais and his nine servants/guards booked for allegedly kidnapping, abating and torturing to death Nazim Jokhio.

On Saturday, the judge took up the matter to frame the charges against the suspects, when the Malir district prison’s superintendent instead of producing detained MPA filed a statement saying that the MPA could not be produced before the court as he was suffering from “high blood pressure symptomatic”.

Complainant Afzal Jokhio, a brother of the slain Nazim Jokhio, appeared in court and stated that Advocate Mazhar Ali Junejo was not his counsel.

In the meanwhile, Mr Junejo filed power of attorney on behalf of the mother of the deceased, Ms Jamiat.

The council also filed a statement supported by an affidavit signed by Ms Jamiat stating that she being a legal heir of the slain Nazim Jokhio did not compromise her son’s murder with the accused persons.

The mother clarified that an earlier out-of-the-court compromise purportedly filed in the court along with her son Afzal Jokio and the victim’s widow Shireen was due to “pressure/influence by the accused persons”.

Therefore, the mother asked the court that the “same may kindly be treated as null and void and same has been withdrawn by me”.

However, Ms Jamiat’s application was not taken up during the hearing.

The judge ordered that “due to non-production of accused Jam Awais charge could not framed”.

He fixed the matter on Sept 24 for framing charges against them.

The judge issued the order to the prison authorities for production of MPA Jam Awais on the next date when all other suspects were also told to ensure their presence before the court.

He had ruled that “grounds exist to believe that offence is committed. Therefore, cognizance is taken on the report for the offences under Sections 302 (premeditated murder), 201 (causing disappearance of evidence of offence, or giving false information to screen offender), 365 (kidnapping), 506 (criminal intimidation), 109 (abetment) and 34 (common intention) of the Pakistan Penal Code”.

The magistrate sent the matter to the relevant session’s court for trial of the suspects.

However, the magistrate had discharged from the case against MNA Jam Abdul Karim, the elder brother of Jam Awais, Abdul Razzaq, Muhammad Khan, Muhammad Ishaque, Atta Muhammad and Jamal due to ‘insufficient evidence’ against them.