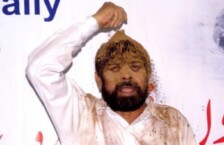 Various political, religious and minority organisations have condemned Israeli aggression against Palestinians and have demanded an immediate end to atrocities in the Gaza strip.

World Minorities Alliance Convener J Salik on Monday protested against the Israeli attacks on Gaza with pouring ash on his head. Salik demanded that the international community, particularly the United Nations, play their role to halt the escalating crisis in Gaza.

“The Israel-Palestine war is not a religious conflict. The Christian community is with the Palestinians in their struggle for freedom,” Salik said.

He said the Israeli atrocities must not go unchecked, as it risks security of the wider region.
He said the Pope, Imam-e-Kaaba and the Archbishop of Canterbury should interfere to help stop the conflict.

Meanwhile, the Milli Yekjehti Council (MYJC) also announced to observe a day of condemnation against Israel on July 18 and Quds Day on the last Friday of Ramazan. The MYJC demanded that the government officially observe Quds Day in Pakistan.

MYJC Secretary General Liaquat Baloch and Senior Vice-President Allama Sajid Naqvi said at a press conference that leaders of the Pakistan Movement had backed the Palestinians’ right to an independent state.

The council said the government’s verbal condemnations of the Israeli aggression are not enough and demanded that Pakistan raise a strong voice against Israel at global forums. They said the Organisation of Islamic Cooperation (OIC) should play its role.

The MYJC demanded an immediate end to Israeli strikes in Gaza and a UN enquiry into the rights violations and war crimes committed by Israel.

They said over 170 Palestinians have died in the Israeli air strikes so far while hundreds are injured. Umar said the Arab countries should cut diplomatic ties with Israel.