‘Minorities are overlooked in mainstream media’ 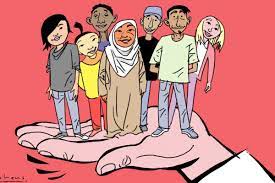 Religious and ethnic minorities have been overlooked in the country’s mainstream media and it is because reporting priorities in the media industry are dictated by commercial interests rather than human rights or public good.

Pakistan Federal Union of Journalists President Shahzada Zulfiqar said this while addressing a session on marginalised communities and the media’s role in a two-day interfaith harmony workshop that was recently organised by the Pak Institute of Peace Studies, an Islamabad-based advocacy and research think tank.

Citing examples of the recent past, he said mainstream media preferred to give airtime to a politician’s private affairs in Punjab rather than an incident of violence and killings in Balochistan.

Veengas, a journalist who has extensively covered minority issues, stressed the need for sensitising of media on religious pluralism and more nuanced coverage of religious minorities, and said the Sindhi media was more conscious about covering the minorities-related issues, such as cases of forced conversions.

Other speakers, including Zia Ur Rehman and Syed Arfeen, said balanced reporting could help promote equality, harmony, peace, and tolerance in society. They also stressed the need for the diversification of the news room.

In another session on freedom of expression, veteran journalist Wusatullah Khan said our society had an inherent tendency to curtail people’s right to free expression on different pretexts.

“Even the scanty freedoms that exist in some form in the country are also reserved for the dominant communities. The members of minority groups have no say in the national discourse,” he remarked.

Sabookh Syed, journalist and head of the Digital Media Association of Pakistan, said that critical voices were muffled in Pakistan, and questions were turned down on the grounds of religious sensitivity or national security.

Suffocating environments caused explosive situations because a society devoid of outlets for free expression ultimately imploded in a violent way, he said. In a session on interfaith relations, prominent religious scholar Maulana Syed Ahmed Binori said Islam was spread all over the world due to the message of peace and tolerance. “Pakistan is a diverse country with many religions and cultures,” he said.

Commenting on the issue of forced conversion of Hindus to the Muslim faith, Binori said there was no compulsion in Islam, which prohibited forced conversions. Likewise, Mufti Faisal Japanwala, another scholar, said all religions were equally sacrosanct, and no individual had the right to insult any religion.