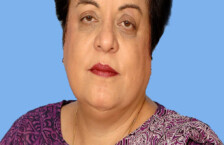 While addressing the audience, Federal Minister for Human Rights Dr Shireen Mazari spoke about the need to move beyond a traditional approach to human rights diplomacy that focuses narrowly on inter-state relations.

The minister highlighted that the changing human rights paradigm warrants accounting for non-state actors such as the civil society, business community and corporations, which are important stakeholders in terms of human rights diplomacy. She emphasised the work that the Ministry of Human Rights is already doing in this regard in terms of drafting procedures for an action plan on business and human rights in Pakistan.

She said in lieu of the changing human rights paradigm, it may be beneficial to shift to a more thematic approach to Human Rights Diplomacy, one in which states identify specific human rights issues such as women and child rights and develop policies on these issues.

“Such an approach may also be pivotal in addressing issues such as the ongoing siege in by Indian Occupation Forces in IOK,” she added

The Ministry of Human Rights has raised this issue at several international forums and has approached 18 Human Rights Special Mandate Holders to take urgent action against the gross human rights atrocities in IOK.

Chief guest of the event Federal Minister for Planning and Special Initiatives Mr. Asad Umar addressed the audience and said that morality should be part of decision-making processes. He also emphasised that human rights should be central pillar of Pakistan’s foreign relations.

Pakistan should strive towards using international forums more effectively with this imperative.

Ms. Ingrid Johnsoson, Swedish Ambassador to Pakistan was also part of the panel discussion. She spoke about feminist foreign policy in Sweden which could serve as an example to promote and support gender equality.

Mr. Aizaz Ahmad Chaudhary, Director General of Institute of Strategic Studies also mentioned that traditional ways of diplomacy have been changed now. The term human rights can be used in positive and negative manner. The selective use of term is used to appreciate or bash countries.

The Secretary of Ministry of Human Rights Ms. Rabiya Javeri Agha while moderating the panel discussion mentioned that Human rights Diplomacy is the skill of dealing with people and managing international relations through the lens of a human rights perspective.

She further said Human Rights Diplomacy is steeped in our culture and in our religion.