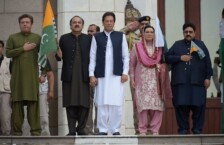 ISLAMABAD: On the call of Prime Minister Imran Khan, millions of Pakistanis across the country took to the streets on Friday to observe Kashmir Hour from 12pm to 12:30pm to express solidarity with the people of the occupied valley.

Sirens rang out across the country followed by broadcasts of national anthems of Pakistan and Kashmir, while traffic ground to a halt for several minutes in solidarity with the protest rallies.

Chants of “Kashmir Banay Ga Pakistan (Kashmir will become Pakistan)” and “Hum Tumharay Sath Hain (we are with you)” reverberated in the streets.

In the capital Islamabad, thousands gathered on Constitution Avenue in front of the government offices where Prime Minister Imran addressed the nation. The PM vowed to continue fighting for Kashmir until the disputed Himalayan territory was “liberated”.

“We are with them [Kashmiris] in their testing times. The message that goes out of here today is that as long as Kashmiris don’t get freedom, we will stand with them,” he said, while launching a blistering attack on Indian Prime Minister Narendra Modi comparing his administration to the Third Reich in Nazi Germany.

“We have to understand the ideology of the BJP [Bharatiya Janata Party] and RSS [Rashtriya Swayamsevak Sangh]. The RSS believes Hindus are superior to all others – their manifesto is either to force Muslims out of India or treat them as third-class citizens. The RSS rhetoric has captured India just like the Nazi party held Germany hostage,” he said.

The premier said the entire world should have already taken a stand for Kashmiris but religion proved a decisive factor. “Unfortunately, the world tends to remain silent when those being oppressed are Muslims. The world’s reaction would have been much stronger if Kashmiris were not Muslims,” said PM Imran.

He said India was planning a ‘false flag’ attack to escalate the situation but warned New Delhi that Pakistan would respond with greater force if that happened. “We are warning the world that India will do something grave in Azad Kashmir,” he said.

“I want to tell you, Narendra Modi, that we will give a befitting response. Our armed forces are ready,” PM Imran told the rally.

“The world needs to realise that India’s toxic ideology will eventually affect everyone. They can choose to stay silent right now but they will face the problem down the line. The international community must know that any conflict between two nuclear-armed countries will be destructive for the entire world,” said the PM.

The premier asserted that Pakistan remained committed to highlighting the Kashmir cause at all international forums. “I am an ambassador for Kashmir and will do everything in my power to help my Kashmiri brothers and sisters. We will continue to speak to all world leaders and international media outlets to highlight Modi’s brutalities in IOK,” he said.

“We will run a worldwide campaign involving overseas Pakistanis, international human rights organisations and activists, celebrities, and influencers. We will inform them of the situation in IOK and they can help turn the world’s attention to this grave humanitarian crisis.”

“Lastly, I want to tell the Kashmiri people that Pakistan will always be with them in their struggle for rights and freedom. I know that Modi’s actions in IOK will prove to be the catalyst for Kashmir’s freedom,” said PM Imran.

Separately, President Arif Alvi addressed people and groups of schoolchildren who had gathered at the Aiwan-e-Sadr to express solidarity with Kashmiri people in response to the government’s call. First Lady Begum Samina Alvi was also present.

President Alvi said, “Pakistan will never step back from supporting the Kashmiris’ right to freedom and will continue to extend moral, political and diplomatic support to them.”

Alvi said the entire Pakistani nation through their peaceful, yet strong protest, had shown to the world that they were united for the cause of Kashmir.

“By revoking the special status of occupied Kashmir, India had broken the pledge and promise with the Kashmiris and the international community of resolving the dispute through the resolutions of United Nations Security Council (UNSC),” said Alvi, adding that India was blatantly lying to the world that Kashmir was its internal matter.

He said the Kashmiris were facing oppression by the Indian occupation forces who were using the inhumane practice of firing pellet guns on civilians. “Through continuous communication blackout and curfew, India has turned the valley into the largest human jail in history,” said the president.

He said Pakistan believed that the only solution was the implementation of UNSC resolutions in letter and spirit, adding that Muslims were not supposed to initiate war, however if it was imposed on them, it would become their obligation to fight against the tyranny and oppression.

Alvi warned the international community that India, under the leadership of a racist prime minister, could trigger a nuclear war against Pakistan to cover its human rights violations in occupied Kashmir.

The demonstration was the first in what would be weekly rallies held nationwide until PM Imran leaves for New York next month to attend the United Nations General Assembly, where he would raise the Kashmir issue.

Addressing the Afghan refugees, Minister for Safron and Narcotics Control Shehryar Khan Afridi said while Afghan peace was being achieved, the world needed to shift its focus on resolution of the Kashmir issue which was mandatory for world peace.

He said, “Regional peace faces threats from the expansionist designs of Indian Prime Minister Narendra Modi who is pushing the Hindutva agenda. Modi wants to annex all South Asian states to create a greater Hindu state. He started this campaign by annexing IOK at gunpoint. If the world doesn’t act now, he will get encouraged and move to next destinations jeopardising regional and world peace.”

He said, “Over the past few days, 10,000 Kashmiri daughters have been raped by Indian army.”

Afridi urged the world to take cognisance of the massive human rights violations in IOK.

“The incumbent government is raising the Kashmir issue at each international forum. We want to make it clear to the whole world that Pakistan will always stand by the side of the Kashmiri people in their struggle to self-determination,” said the governor, urging the international community to play its role to stop Indian atrocities in Kashmir.

Like other parts of the country, political and religious parties, students and social bodies took out rallies across Balochistan, including its capital, to express solidarity with the Kashmiri people and special prayers were also offered in mosques on Friday for getting their right to self-determination. Governor Amanullah Khan Yasinzai along with Chief Minister Jam Kamal Khan led the main rally taken out from Balochistan Assembly, which accumulated at Serina Chowk after marching though Zarghoon Road to express solidarity with Kashmiri people.

Addressing the participants of the rally, Governor Amanullah said, “The true face of India has been exposed in front of the world by violating human rights from over 70 years in occupied Kashmiri. The voice of the Kashmiri people cannot be suppressed through use of force.”

Chief Minister Kamal said, “The people of India have begun to raise their voice against the Modi government for violating human rights in occupied Kashmir. The whole nation stands firmly with the Kashmiri people in their struggle for independence.”

He said on call of Prime Minister Imran, people, including women, students, children, party workers and elders, had taken part in rallies to express solidarity with the Kashmiri people in the respective areas of Balochsitan, including its rural areas.