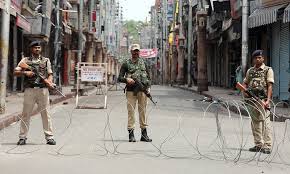 Speakers at a conference held on Saturday urged the international community to play its role to end clampdown in the Occupied Kashmir imposed by India, saying the deteriorating human right situation in the valley can drive the two nuclear countries towards a war which would not only a threat to the region, but also to the entire world population.

They also emphasised upon highlighting the human right abuse in IOK from outside Pakistan to build maximum pressure on the Modi regime to review its illegal decision of revoking the special status of the valley.

The event titled ‘Roundtable on Kashmir Conundrum: The role of media’ was organised by Centre for Peace, Security and Developmental Studies (CPSD). The session was chaired by ex-DG ISPR Major General Athar Abbas (retd) who in his introductory remarks said that India is fast going towards an illiberal state from a democratic nation. He said except two or three TV channels, the rest of Indian mainstream media has been trapped by corporate commercial interests and the state’s narrative.

The local media has surrounded before the Modi regime with raising no question on Kashmir despite over eight million people of the valley have been under a military lockdown and a communications blackout for the last 106 days.

However, Abbas said the international community, particularly the media has come hard with criticism on the Modi regime. Elaborating, he said, the Indian media was criticising international media particularly BBC, CNN, for being biased and playing a negative propaganda against India.

George Galloway, a senior British politician and human right activist on this occasion highlighted the role of international media on Kashmir. “Indian Occupied Kashmir remained in chains. Over 100 days on, condition in Kashmir is miserably deteriorated because of total blackout of the truth and communication”.

He said that over 8 million people are held hostage by millions of armed troops inside the valley. He asked the international community including UN to step up to ease tension in the strategically vital part of the globe.

“There had never been a time when India had a less prestigious government, like the present one.”

The BJP-led government policies towards Kashmir are depicting the militant mindset.

However, he advised Pakistani writers, right activists and the media to project the case of Kashmir on humanitarian grounds instead on religious basis. “Your language must be correct when you want Kashmiris to be heard by the international community. You have to be talking in the language of universal rights. He said that people in the UK and the USA have different mindsets, and languages, their religions are different and when you project issues [of Kashmir] on a religious ground, most of the people pay no heeds, he added.

“We must develop the media by ourselves. I have 1.7 million followers on the social media. I can send my messages to them at once by pressing a mobile phone button,” Galloway said.

Marcus C Thomlinson, founder of the Mindset Revolution while highlighting the role of the British media on Kashmir issue said that mindset is absolutely everything. He said when someone is clear about his goals; he should be following to achieve it with passions.

Raja Sharaz Akhtar, an International Peace Activist, the UK discussed on the role of Kashmiri media on the issues of the valley. He said ramifications of war between Pakistan and India would not only affect the people of both nuclear countries but also stretch to the entire globe, if the international community did not make timely efforts to stop the consistent Indian atrocities in the IOK.

Imtiaz Gull, a senior Journalist discussed on the role of the electronic media. He advised people not to make noises in Pakistan, but to raise the Kashmir issue out of the country. “Let the voice of Kashmir be heard in the UK, the United States of America, UNO etc to put pressure on the Modi regime,” he emphasised.

He said since the imposition of curfew in IOK, the Indian armed troops killed a number of people brutality, several women were gang rapped. Journalists, IT engineers etc, lost their jobs and shifted to other cities, due to Internet disconnections.

Shehyar Khan Afridi, Minister of State for SAFRON and Narcotics highlighted the role of social media on the issue of Kashmir. He said that humanity is bleeding and suffering in IOK.

But, unfortunately no country asked Modi to stop human rights violations due to commercial interests. He said the international community is reluctant to raise voice for Kashmiris, since India is one of the largest markets. Countries have a right to protect their national interests, but not at the cost of humanity. Humanity should not suffer at any cost.

He said Prime Minister Imran Khan is bravely raising voice for the freedom and self-determination of Kashmiris as an ambassador at all fora. He made it clear that the state of Pakistan will never compromise on the issue of Kashmir and will stand affirmed with the oppressed people of IOK.