MEDIA: THE SAFETY OF JOURNALISTS 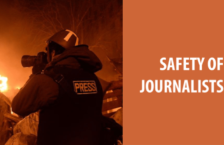 Television news anchor Arshad Sharif, unceremoniously fired by his channel in September, was shot dead in Kenya a month later in mysterious circumstances. TV reporter Sadaf Naeem fell from a truck carrying Pakistan Tehreek-i-Insaf (PTI) leaders and chairman Imran Khan during his long march, and was crushed to death near Sadhoke. Both gruesome deaths were politicised by leaders trying to score points in an unending battle of “who is the worst fascist.”

While the circumstances around Sharif’s death are vastly different to Naeem’s, who died in the line of duty, it bears mentioning because it points to the dangers journalists face for their reporting.

Naeem’s news reminded a reporter in Khyber Pakhtunkhwa (KP), who asked not to be named, of the time she travelled with Khan in May during his rally in Peshawar. She and her team had no safety equipment then. Although she did not say it, I knew what she was thinking: it could have been her.

Adequately trained journalists who feel safe doing their job is perhaps one of the most effective ways of fighting disinformation. Journalists should press media owners to prioritise safety training and being paid on time, in accordance with the law…

This KP journalist is no stranger to dangerous working conditions, having reported across KP when terrorism was at its peak following 9/11. Then, the channel had distributed some protective gear to essential staff. However, that equipment was recalled once the violence died down though, she says, “You know violence hasn’t exactly ceased completely.” Today too, she barely sees any other reporters in protective gear when heading into clearly dangerous situations.

Karachi is no less a terrible landscape for violence. Freelance journalist Tooba Masood Khan remembers the bombing of then SSP Chaudhry Aslam’s house in DHA in 2012. She heard the explosion as she lived nearby and, since no one else was in the newsroom that early in the morning, she was told to go to the scene to “check it out.” Once she got there, she realised “I had absolutely no idea what I was supposed to do,” she tells me. “I was a young journalist then and had no idea about what journalists do, what safety was. No one had spoken to me about it, no one had told me.”

Naeem’s death has kickstarted a much needed conversation on the lack of safety training for journalists, but how can it be translated into action? Expecting media owners or journalists not to chase stories for ratings seems like a futile ask. The focus and priority should be on ensuring media workers’ protection — reporter, cameraman and whoever else is in the field.

The delay of payment of salaries is especially criminal because of the toll it takes on journalists’ mental health, already strained by the very nature of writing, editing and analysing the canvas of Pakistan’s diabolical landscape.

According to the Protection of Journalist and Media Professionals Bill, passed in 2021, media owners have to provide their employees with safety training a) a month into their employment and b) “prior to engaging in reporting or any journalistic work in any location.” It then goes on to specify the kinds of training needed for journalists working in dangerous locations: health and environmental hazards training (HEHT), avoidance, deterrence and escape training (ADET) and kidnapping and crises responses training (KCRT).

I wonder how many of my journalist friends know this is mandated by law.

Incidentally, the law also states that, “Media owners shall have a legal obligation to pay the journalists on time and not unnecessarily withhold the remuneration of the journalists.”

The delay of payment of salaries is especially criminal because of the toll it takes on journalists’ mental health, already strained by the very nature of writing, editing and analysing the canvas of Pakistan’s diabolical landscape. In my research on newsroom culture, I am meeting more and more journalists quitting the industry because the financial insecurity is too much.

Media owners are also bound to provide life and health insurance to journalists employed in long-term and short-term contracts, and anyone without a contract who is working in a dangerous location.

I feel for those journalists who are valued only when they’re getting their media owners the eyeballs needed for them to make bank. Is it cynical to expect nothing will come of the commission formed to investigate Sharif’s death in Kenya? A similar commission to investigate Saleem Shahzad’s murder in 2011 in Islamabad said in its 2013 report that, “It had been unable to identify the culprits despite having looked very hard for substantial evidence, direct or circumstantial.”

The International Federation of Journalists, in 2022, listed Pakistan as the fifth most dangerous country in the world to report in. A year earlier, Reporters without Borders said Pakistan’s drop of 12 points in the Press Freedom Index earned the former Prime Minister Khan the title of “press predator”.

In Pakistan, Freedom Network reported at least 86 cases of attacks and violations against media and its practitioners between May 2021 and April 2022.

These data sets are horrific by any standards. When I asked a 28-year-old male reporter whether any of this weighed on his mind when he went out to report in Karachi, he just shrugged his shoulders and said he needed the adrenaline rush to report properly.

What does safety training entail and what are its benefits? The Dart Centre for Journalism and Trauma in 2017 surveyed 247 journalists around the world about the safety training they had received. The report found that many journalists changed their behaviors following the training, such as carrying first-aid kits on assignment, or paying more attention to their personal safety.

Adequately trained journalists who feel safe doing their job is perhaps one of the most effective ways of fighting disinformation.

Here, journalist bodies across Pakistan should unite to press media owners to priorities safety training for their staff as well as pay them their salaries on time — in accordance with the law.

This will not provide any relief to Naeem’s children who, reportedly, did not want their mother to go to work that fateful Sunday, but it may prevent avoidable deaths of other working journalist mothers and fathers in the line of duty.

The writer is researching newsroom culture in Pakistan.