It was a random encounter over a year and a half back. Hamid asked if I would consent to be part of his live show. I said yes on the condition that he introduced me properly.

I was out of my turf. Perhaps he was as well, but he conscientiously memorised the intro. I made a comment or two about the exciting event we were both attending. Listening to my comment another gentleman made a patronising comment about me.

Hamid sprang to my defence immediately. It was a timely rebuke but his speed was impressive. The innate gallantry of his action made me think that in another time and place we could have been on the same page.

I was marooned in an exclusive guest house for foreigners for about four months in Islamabad. The rationale behind this exercise was researching and writing my new book which was set in Pakistan. Being an information junkie, I devoured both the morning papers and often watched television at night.

There he was on his show, surprising me time and again with his ease and skill. There was no question in my mind that he had raised the bar considerably for the local television industry. There were no screaming matches on his show ‘Capital Talk’ because he knew his job well. Yet his appearance was deceptive. He looked like the average guy with a feel-good manner.

His fame was properly introduced to me by my taxi driver. He had caught the television clip and informed me that I had made the big time in Pakistan because Hamid Mir had asked for my opinion. When I pressed him further, his response was that Hamid was the only one who spoke the truth for everybody. Praise could not go higher than that.

When I left Pakistan I hoped Hamid had been acknowledged by his peers.

It was late at night when some form of restlessness made me read two Pakistani papers online. The newsprint itself had the same effect as being shot. I closed my eyes and the entire scene swam before me. The bullets, the shouting, the agonising pain. I could see his crumpled form, the mobile in his hand, the prayer which rose in his throat as he prepared himself for death.

The images were powerful and my response was of outrage. The feeling was so intense that it bordered on being violent. So I made numerous calls to Pakistan. I wanted to send him a message. I woke his brother up at an ungodly hour. He sensed my anguish and kept me abreast of medical procedures. Over that telephone connection he could smell my concern as I could his fear for his brother.

Over the next ten days I followed responses to the event. Along with his significant visitors rose a monstrous tide of accusations, verbal abuse and injunctions against the independently-owned television network that aired Hamid’s talk show. The well-entrenched venom of competitors coupled with the sinister accusations made by a desperate politician seemed to muffle the genuine cry of an injured man.

Hamid had pointed a finger at certain forces. And then rose the campaign to say that the army was being maligned. Out came the crocodile tears and beating of breasts over this trumped-up scheme.

The media, instead of protesting vociferously the deadly assault on a national superstar, engaged in sniper warfare. The icing on this malevolent cake was the accusation that Hamid was in fact a traitor as was his brother, Amir Mir, who had read his statement to the press. Big Brother was watching and Hamid’s goose was cooked.

This evoked another response at my end and I was confident that international support would ensure that he was out of harm’s way. Everything is on hold for Hamid at present but not the respect and undiluted affection beamed from continents away. With this comes a note of warning to the forces of cowardice skulking in Pakistan that dousing the light of one of the brightest stars in Pakistan’s media galaxy will not go un-noticed. 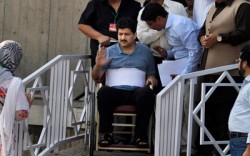 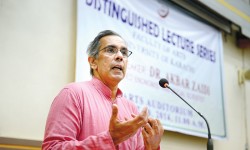 If TV cameras are removed from red zone, there will be no revolution