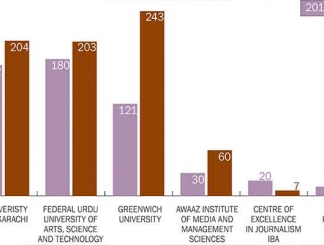 The financial crisis that has been plaguing the entire media industry in Pakistan is a harsh reality that everyone associated with it has been affected by in some ways, if not completely.

But students who are yet to enter the so-called glamorous world of the media are either in denial of the prevalent situation or totally unaware of it.

Data collected by The News from different public and private universities and degree-awarding institutions (DAIs) shows the number of students pursuing mass communication, journalism and media sciences programmes on an upward trend.

In the past one year or so, media organisations have laid off hundreds of journalists and stopped fresh recruitment. Some of the widely-read newspapers have seen a reduction in the number of their printed pages. And a few news channels have taken their prime-time shows off the air.

Media organisations have blamed budgetary crisis for taking these drastic measures, which have affected journalists across the country. A large number of journalists have lost their jobs not because of their performance but because their employers are unable to keep paying them.

Among those who still have their jobs, hundreds have faced pay cuts. Most of them feel insecure, fearing if they can survive the crisis. But even though the media industry is in dire straits, its charm remains unchanged, particularly for the students pursuing relevant degree programmes.

Universities and DAIs that offer admissions in mass communication and media sciences courses have been steadily attracting more students for their undergraduate and postgraduate programmes. These enrollees say that the country’s media industry is not in the shrinking stage but rather going through an expansion.

Compared to the previous academic year, the 2018-19 enrolment of media students at major educational institutes shows an upward trend. The News gathered data from the University of Karachi (KU), the Federal Urdu University of Arts, Science & Technology (Fuuast), the Greenwich University (GU), the Aawaz Institute of Media & Management Sciences (AIMS), the Centre for Excellence in Journalism (CEJ) and the Ziauddin University (ZU).

The survey targeted the students who have secured admissions in the morning and evening BS, MS and MPhil programmes of mass communication, media sciences, journalism and media studies.

In 2018 GU had enrolled 121 media sciences students, but in 2019 it has awarded 243 admissions. AIMS had awarded 30 admissions last year, but it has doubled the enrolment this year.

The media industry saw a boom in the late 2000’s and attracted a lot of students. Though universities and DAIs still produce hundreds of journalism graduates every year, majority of them feel frustrated after completing their studies because they can hardly find jobs in the industry.

When The News tried to find out the views of senior faculty members associated with different universities, they said that there was a world of difference between what the students are taught and what they learn once they step out into the world. They also lamented the lack of a controlling authority that could keep a check on the quality of media education being imparted at universities.

“After graduation, only those students can find jobs who have worked as interns for media organisations during their degree programmes,” said Asst Prof Dr Irfan Aziz of Fuuast’s mass communication department. “Universities should assume a practical approach to journalism to fill the gap between the media industry and the academia.”

KU Mass Communication Department Chairperson Seemi Naghmana Tahir said: “The students who get themselves enrolled in media studies programmes have no idea about the industry’s current situation. They are just inspired by the anchorpersons they watch on TV and by the overall charm of the media.”

She added: “The current situation, though, has forced universities and DAIs to set up in-house studios, radio stations and web channels to prepare skilful graduates who could pursue their careers in the media.”

However, AIMS Director Prof Dr Nasir Ansar said the country’s media industry was not on the verge of collapse. He said the electronic media was introduced less than two decades ago, and some of the business persons were still making huge investments in the industry. He pointed out that the Pakistan Electronic Media Regulatory Authority had recently auctioned 58 new TV channel licences.

The News interviewed over a dozen students of different universities on the financial crisis plaguing the media industry. Except for a few of them, no one claimed to know what is going on in the industry they wish to join.

But for some of the students, mass communication was not even their first choice. They enrolled in the programme only because they had no chance of getting an admission in other fields of study.

Abrar Hussain, a third-year student in Fuuast’s mass communication department, said he had come to Karachi from Gilgit to pursue higher education at any of the affordable universities.

Junaid Khan, a second-year student at KU, narrated a similar story. But Hafsa Kanwal, a student of mass communication at Fuuast, said that she wished to become an anchorperson, and that it was her choice to get an admission in a mass communication programme.

She said that new organisations are getting TV channel licences, which means they will need a lot of workforce. “I do not agree with the claim that mass communication graduates have slim chances of getting jobs, that too in a situation where new investors are planning to bring their TV channels on air.”

CEJ Director Kamal Siddiqi, who was formerly the editor for an English daily, said that most of the mass communication graduates join advertising agencies, public relations companies, the film industry and other relevant fields.

But, he said, journalism students are still facing hardships because of the crisis in the media industry. He added that today’s industry needs more professionalism, but most of the graduates do not acquire the required skills and education at universities. Therefore, universities and faculties should review what they are teaching their students.

Prof Dr Tauseef Ahmed Khan, who is a retired academic and a regular columnist for an Urdu daily, said parents and students lack proper counselling, which is why the media industry’s charm remains strong for students.

He said that besides other issues plaguing the industry, media organisations have been impacted by an unstable national economy. He explained that most of these organisations earn from private companies’ advertisements.

But since new TV channels are coming on air frequently, the revenue generated from advertisements is either being divided between the media organisations or going to those offering cheaper rates, he said. Thus, he added, we cannot expect stability in the media industry until the country’s economy becomes stable.