Media should be introspective and self-critical, says Javed Jabbar 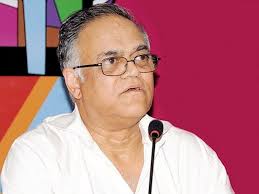 Former federal minister and leading intellectual Javed Jabbar has said that the media should be introspective and self-critical rather than them just blaming the state for “impediments”.

He was speaking at a seminar titled ‘Importance of Electronic Media in Promoting Art and Culture’ at the Karachi Arts Council, whose Electronic Media and Aesthetic Committee had arranged the event.

“We must learn to distinguish between art and culture,” said Jabbar. “Culture represents the totality of the achievement of human society, while art means sacrificing material things for promoting a cause through artistic expression.”

He acknowledged that state policy towards art and culture has not been what it should have. He also said that news media should be publicly owned and not by the state.

He said that their ownership should be invited through organisations like the stock exchange, and that we do not need a ratings-oriented media. The volume of ownership does not matter, he added.

Noted writer and playwright Noorul Huda Shah said: “What has been suppressed for 70 years is culture. Racial and ethnic discrimination has been used as a weapon of suppression. Many ills are construed as culture.”

She said that in many TV plays the people of Sindh and Khyber Pakhtunkhwa are portrayed as criminals, so it came to be wrongly concluded that the edifice of the culture of these two provinces is crime. “These people are certainly not representative of their ethnic or provincial culture.”

Referring to art and culture, Geo News Managing Director Azhar Abbas said that their coverage in the electronic media should be in proportion to the nature of the event.

He said that in a set-up marked by oppression, arts like poetry, painting and other forms flourish. “Art and culture cannot be duly projected if there is no diversity, be it racial, ethnic or whatever.”

Writers and literati must be given due chance, as they are the ones who bring issues to the fore and who bring the scars of society into public view, he added.

Noted film-maker and director Fizza Ali Meerza said that the electronic media should prioritise their coverage of art and culture events, meaning thereby that they should determine how important a certain programme is and accord it the time and coverage warranted.

Culture, she said, is not confined to provinces. “Every street, every village has its own culture. That is something the electronic media are not too aware of.”

Jahanzaib Haque of Dawn.com said that social events must empower all segments of society, adding that in this the digital media can play a pivotal role.