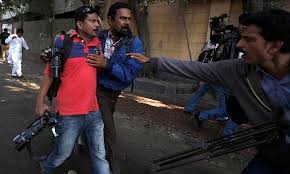 TUESDAY’S showdown at Karachi airport was a prime example of how the authorities should not handle large-scale protests.

The killing of two protesting PIA employees came as a major shock; an unbiased investigation is needed to look at how exactly the men were killed and who fired the shots.

What was clear, though, was that the law-enforcement personnel were using brute force to push back the protesters.

While the general use of brute force is condemnable, there is also a possibility that media professionals may have been specifically targeted as they were reporting on the use of force by the law enforcers.

Reporting from the scene of such fluid situations carries immense risk for media personnel.

The environment can change within moments and sometimes journalists have to make a choice between getting the story and ensuring personal safety. But this is really no choice at all as the personal safety of journalists is of prime importance.

While the rough tactics of the law enforcers are inexcusable — and our police and paramilitary forces would do well to undergo intensive training in non-lethal methods of crowd control — the role media houses play in egging on their workers to get the story, come what may, also needs to be discussed.

Often camera operators, photographers and reporters are urged to get footage or interviews in clearly unstable environments. However, it should be emphasised that while getting the story is important, it is essential that media personnel maintain a safe distance when covering volatile events.

Journalists need safety gear, first-aid kits and training in order to deal with such situations.

This is an area media managers must focus on to ensure the protection of journalists and promote a safer work culture for media personnel.

KUJ to send its recommendations to government this month