‘Media needs to be independent from state’ 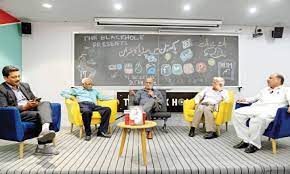 ISLAMABAD: Keeping in view interests of the public at large, the media industry needs to be absolutely independent from the state.

This was pointed out at the launch of the book Pakistan Mein Media Ka Buhran, on Tuesday.

PPP leader Farhatullah Babar said if the media was free to comment and its analysis was taken seriously we would not have faced restrictions placed by the Financial Action Task Force (FATF).

He said this book was a much needed document to understand the media industry today for all those who were interested. Journalists and members of the civil society need this study for future reference of the crisis, he added.

Columnist Dr Nazir Mahmood said it was the first book written in the 21st century on the state of media. It has to be taken as a continuation of the original work done by Zamir Niazi related to Pakistan in the 20th century, he added.

Dr Tauseef Ahmed Khan, one of the authors of the book, said media had to develop its economic model to enjoy freedom and it had to be independent from state advertising and sourcing of news.

“The state has introduced itself as the sole guarantor of the advertising revenue and sources of the news. The analysis part has also been taken over by defense specialists,” he said.

Co-author Dr Irfan Aziz said the book was an attempt to document facts related to media during the last few years.

Columnist and activist Harris Khalique said the book is a comprehensive document on the society in Pakistan. He said it provides excellent material for a greater synthesis of society.