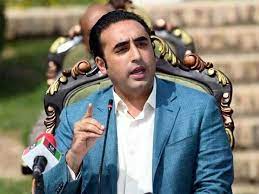 He said that access of citizens to accurate information was the foundation of a strong democratic society. In his message on World Press Freedom Day, the PPP chairman said the constitution of Pakistan guarantees freedom of the press and the right of citizens to access accurate information. Bilawal said that his party had never been, and never will, compromise on the issue of freedom of speech and writing.

He pointed out that Benazir Bhutto, after assuming the office of the Prime Minister for the first time, had abolished the black laws against the media in 1988, which were imposed during the dictatorship.

“Recent candid stance against the Prevention of Electronic Crimes Act (PECA) was a manifestation of the PPP’s strict adherence to its ideology and guiding principles,” he maintained. Bilawal said that the PPP and Pakistan’s journalist fraternity had worked together for the protection of freedom of expression and journalism, which spans over five decades.

He expressed concern saying that media workers all over the world are facing difficult situation at present. He urged the need to ensure the safety of media workers around the world. “On the one hand, access to the Internet and censorship of content is on the rise and on the other, fake news and hate-mongering propaganda are also on the increase,” he added. Bilawal also extended felicitation to journalists all over the world including Pakistan.