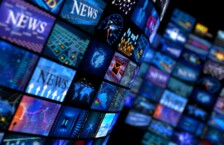 ISLAMABAD: Senior journalists have constituted the Media Crisis Joint Action Committee to deal with the problems of journalists.

The committee, headed by the PFUJ ex-secretary CR Shamsi, will start its organised struggle for the rights of media persons, says a press release on Thursday.

The decision to form this committee was taken in an unusual meeting held the National Press Club. The committee was formed after mutual consultation with senior journalists and all groups of organisations of Rawalpindi and Islamabad, associations, parliamentary Press Gallery Committee, media workers and photo journalists associations. The committee will launch an organised struggle for solving the issues of retrenchment, non-payment of salaries and worst violation of laws. All journalist organisations and groups will provide their representatives to the committee within one week.