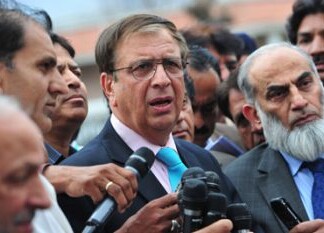 ISLAMABAD: Secretary Election Commission of Pakistan Ishtiq Khan said on Wednesday that code of conduct covering the upcoming general election 2013 to ensure dissemination of credible and unbiased news has been finalized.

Addressing a press conference he said,”It is very encouraging as first time in the history of the country media representatives forwarded their suggestions for regulation of the media.”

According to code of conduct, “During the election period all media have the duty to ensure that the public are properly informed about relevant electoral matters such as political parties, candidates, campaign issues, and voting processes.”

Publicly owned media has a specific mandate requiring fairness and non-discrimination in their election reporting and not to discriminate against any political party or candidate.

All media houses should also follow professional standards and strive for accuracy, balance and impartiality as far as possible.

Media would try to the best of its ability that the news, interviews, talk-shows, current affairs, analysis and information programmes are not biased, in favour of, or against, any party, or candidate.

Media would ensure journalism of the highest standard in their election coverage and try to the best of its ability to avoid all forms of rumours, speculations and disinformation, particularly when these relate to specific political parties, or candidates and where malicious intent is demonstrated.

Discourage all forms of hate speech that can be interpreted as incitement to violence or has the effect of promoting public disorder.

While it is not always possible to cover all candidates in an election, the media should strive to ensure that all candidates or parties shall be subject to journalistic scrutiny and appropriate media coverage according to its area of target audience.

Laws Restricting Freedom of Expression Freedom of expression and the rights of journalists to report freely should be respected by all parties or candidates and state authorities during the election.

There should be provision of full access to information during the election period and afterwards, the code of conduct urged.

The media has a duty to respect and promote tolerance and avoid all forms of expression that might be interpreted as incitement to violence or hatred on the basis of religion, creed, gender, or ethnicity.

The authorities should make special efforts to investigate all acts of violence, intimidation or harassment directed against media personnel or the property or premises of a media outlet, and to bring those responsible to justice, particularly where the act was motivated by an intent to interfere with media freedom.

According to the ECP, there should be no prior censorship of any election coverage and all political parties and state institutions must issue a clear statement that the media will not be penalized for broadcasting or publishing programmes merely because they were critical of a certain party or a type of politics.

The media shall not be held responsible legally for unlawful statements made by candidates or party representatives and broadcast during the course of election campaigns.

The ECP said the state and private media are urged to keep a clear distinction between editorial, opinion, news and paid content, adding that there will not be paid or sponsored news, election evaluation, analyses and editorial opinion.

Parties or candidates representing minorities or special interest communities and groups and are formally registered should be granted access to some airtime and news space.

State and private media will make every effort to ensure allocation of specific time on proportionate basis. Airtime for parties that have been banned or are operating under new names and are publicly engaged in violent acts or opposed to the democratic process and constitutional framework should be avoided.

A party/candidates are to be allowed to purchase airtime/space for political advertisements they should have access to such time/space in a transparent manner in accordance with the Code of Ethics for political Parties.

During elections, the media should endeavor to provide special information programmes that provide an opportunity for members of the public to put questions directly to party leaders and candidates, and for candidates to debate with each other on policy matters and issues that

are of great concern to the electorate.

Candidates standing for office should not, however, act as anchors or presenters during the election period.

Attempt to air special information programmes regarding policy matters and the issues of public importance should be aired during prime viewing or listening hours.

Other media should endeavor to also introduce such programmes as a matter of public service.

Voter education programmes must endeavor be accurate and impartial and must attempt effectively to inform voters about the voting process, including how, when and where to vote, to register to vote and to verify proper registration, the secrecy of the ballot, the importance of voting, the functions of the offices that are under contention, and similar matters.

These programmes should reach the greatest number of voters, including where most relevant, through programmes in regional languages and targeting groups traditionally excluded from the political process, such as women, the under-privileged, and religious and ethnic minorities.

If a broadcaster/newspaper publishes the results of an opinion poll or election projection, they should strive to report the results fairly and in a proper context explaining the scope and limits of such polls that have their own peculiar limitations.

According to the media code, broadcasters will not air any final, formal and definite elections results without the consent and or they will be aired only with clear disclaimer that they are unofficial, incomplete and partial results, which should not be taken as final results until election commission has announced final results.

The Election Commission of Pakistan will evolve a suitable mechanism for the implementation of Media Code of Ethics prepared by the representatives of various media organizations.

The Complain Committee will be headed by Additional DG (PR), ECP and will comprise representatives from PBA, APNS, PCP, CPNE, PTV, PBC, PFUJ, SAFMA and SAWN.