Media can become game changer in cause of nutrition 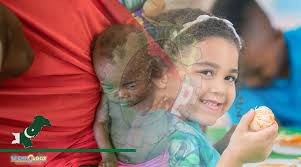 Islamabad: The media in Pakistan can play the role of a game changer in championing the cause of nutrition by disseminating accurate messages about maternal and child nutrition. Child under nutrition is caused, not just by lack of adequate nutritious food, but by frequent illness, poor feeding and care practices, and lack of access to health and other services.

Views to this effect were expressed at an advocacy seminar arranged for health beat reporters by the Nutrition Wing of the Ministry of National Health Services at Bhurban. The objective was to have a dialogue with media persons, share the dynamics of the current program as well as upcoming challenges and their possible solutions, and to seek their support for dissemination of correct messages. The event was organized on the directions of President Arif Alvi who recommended that ulema, media and civil society be engaged to dismiss myths and misperceptions related to feeding practices.

The Nutrition Wing, along with a panel of experts from UNICEF, WHO and UN-WFO were present to answer the media queries and to share facts on various aspects of malnutrition in Pakistan.

Speaking on the occasion, Nutrition Director Dr. Baseer Khan Achakzai said, “We must understand that good nutrition is the key to keeping children alive, strong, and healthy throughout childhood. The developmental impact of stunting and other forms of under nutrition happens earlier and is greater than previously thought. The 1,000 days between the start of a woman’s pregnancy and the child’s second birthday, offer an extraordinary window of opportunity for preventing under nutrition and its consequences,” he flagged, adding that the recently approved Nutrition PC-1 for 67 high-burden districts can positively contribute to reduction of various forms of malnutrition.

Dr. Khawaja Masuood Ahmed shared the National Nutrition Survey 2018 (NNS) findings. The high prevalence of various forms of malnutrition is responsible for the ill-health of the people of Pakistan, more than any other cause.

In Pakistan, four out of every ten children under five years of age are stunted and an estimated 5 million children suffer from wasting every year. “And we know that a child with severe wasting is 8 to 9 times more at risk of dying than his well-nourished peers. Over half of the population (among women and children) in the country is anemic. One in eight adolescent girls and one in five adolescent boys suffer from being underweight. At the same time, the prevalence of overweight among young children, women, and adolescents is alarming,” Dr. Khawaja said.

Panel members from UNICEF, Syed Saeed Qadir and Dr. Saba Shuja termed breastfeeding as the single most cost-effective way to protect maternal and young child health, promote healthy growth, and best development in the early years of life. Scaling up optimal breastfeeding could prevent more than 823,000 child and 20,000 maternal deaths each year globally. Infants who are not breastfed are 15 times more likely to die from pneumonia and 11 times more likely to die of diarrhea than those who are breastfed.

In Pakistan, only four out of ten babies start breastfeeding within the first hour of life, and about half of babies are exclusively breastfed for the first six months of life. Bottle-feeding with formula and other mixed feeding is on the rise which puts a baby at serious risk.

Implementation and enforcement of breast milk substitute code/legislation, awareness campaigns, and Baby-Friendly Hospital initiatives are strategies that are currently being under implementation to address the issue of suboptimal breastfeeding practices.

Inappropriate complementary feeding practices among children aged 6-23 months is a major cause of under nutrition and a major driver of stunting. And we need a context-specific social and behavior change communication campaign to improve the nutritional status of children, the participants agreed.

Dr. Naureen Nishtar from WHO highlighted the challenges in implementing the nutrition legislations and emphasized theneed for effective advocacy and implementation of laws to address the emerging issue of overweight and obesity.

An open debate on various aspects of nutrition, shortcomings, and myths, role of mothers, family, society, academia, ulema and teachers was held. The irrational use of breast milk substitutes was also flagged and the government was urged to make certain strict laws to prevent the use of formula milk.