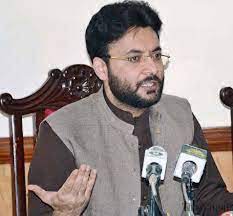 ISLAMABAD   – Minister of State for Information and Broadcasting Farrukh Habib on Friday said all the media forums were being engaged for setting up Pakistan Media Development Authority (PMDA) in line with democratic norms.

The PDMA was crucial to address all the problems of journalists and media houses at one platform, he said while addressing the launching ceremony of a national song at the National Press Club.

“We are moving forward on the Pakistan Media Development Authority under a democratic and constitutional process and getting input from all the media forums in that regard,” he said.

He said the PMDA proposed a media complaint council with 50 per cent representation of journalist community. It would resolve journalist issues on fast track by making sure decision against anybody’s complaint with 21 days. The government has been taking various measures to create an enabling environment for the journalists as it fully believed in the freedom of speech, besides ensuring compliance of the national and international commitments, he noted.

As regards to “Protection of Journalists and Media Professionals Bill, 2020”, prepared by the Ministry of Human Rights, he said it had been approved by the Federal Cabinet and was under process.

The bill would ensure independence and freedom of expression for journalists and media professionals and to end their exploitation, he added.

He said the information ministry was committed to the welfare of the journalist community and taking steps to reduce sense of deprivation among them.

Seeking cooperation of the journalist unions, Farrukh said on this Independence Day media community should renew its pledge for development as the fourth pillar of the state.

He said consultation was underway with the press clubs for inclusion of young journalists in the Prime Minister’s Kamyab Jawan Program. He asked them to float business proposals, assuring full cooperation for getting soft loans from its partnered banks.

The minister said the government would sign accords with the journalist bodies to implement the plan. “Kamyab Jawan Program will empower journalists and help them to be self-sufficient,” he remarked.

The minister said the government would address the residence issues of the journalist community by providing them plots in government schemes to only those who were yet to take benefits of such initiatives in the past.