Marvi for creation of consultative body in fight against terrorism 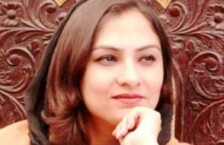 ISLAMABAD – National Assembly Standing Committee on Information and Broadcasting Chairperson Marvi Memon has proposed creation of a consultative body of government and media representatives to help promote better cooperation in the fight against terrorism.

In an exclusive interview with Radio Pakistan, she said media has an important and effective role to complement efforts of the government and the law enforcing agencies to combat terror. She explained in detail the background, rationale and spirit of the special report of the Standing Committee on strengthening media’s role in combating terrorism and said it contains nothing that could be construed as curbs on freedom of media.

The chairperson of the committee said that proposals contained in the report were shared with representatives of the media bodies and their concerns and differences, if any, were duly reflected. Pointing out that the report is available on Internet and is a public document Marvi invited media houses, representative bodies of media and working journalists for a positive criticism and feedback.

She said that the need for an effective media strategy was felt after gory terrorist attack in Peshawar on 16th of December. Prime Minister Nawaz Sharif gave a new vision to the nation to tackle the menace of terrorism through National Action Plan against Terrorism and fighting terrorism on media front is part of the overall national strategy. She said our media is playing a responsible role but some mistakes do creep in and recommendations of the committee were aimed at taking care of this aspect.

Picking up different points of the special report, the chairperson of the National Assembly Standing Committee said most of the recommendations contained in the sand report are already covered in the existing laws. She pointed out that under Article-19 of the constitution the right of freedom of speech and expression is subject to any reasonable restrictions imposed by law in the interest of the glory of Islam or the integrity, security or defence of Pakistan. Similarly, Section-5 of the PEMRA Ordinance empowers the federal government to issue directives to the authority on matters of policy and such directives shall be binding on the authority.

She said that a person who is issued a license under PEMRA Ordinance undertakes to ensure that all programmes and advertisements do not contain or encourage violence, terrorism, racial, ethnic or religious discrimination, sectarianism, extremism, militancy, hatred, pornography, obscenity, vulgarity or other material offensive to commonly accepted standards of decency. She said that the licencee is also required to appoint an in-house monitoring committee to comply with the codes of programmes and advertisements.

She said there are also relevant provisions in Pakistan Penal Code, Code of Criminal Procedure and the Anti-Terrorism Act relating to printing, publishing or disseminating any material to incite hatred or giving projection to any person convicted for a terrorist act or any proscribed organisation. The chairperson of the Standing Committee said there are sufficient legal provisions to deal with issues involved and there is only matter of their implementation.

She said that the committee has given recommendations regarding misuse of social media by terrorists and called for its regulation. She emphasised the need for Cyber Law Bill to be taken up by the parliament. She said there is no intention to muzzle voice of media but to create an environment where terrorist are isolated.