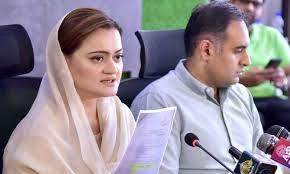 ISLAMABAD: Alleging that the Pakistan Tehreek-i-Insaf (PTI) regime wanted to run the state broadcaster into the ground for the benefit of certain individuals, Information Minister Marriyum Aurangzeb claimed on Saturday that former premier Imran Khan had tried to auction off buildings belonging to Radio Pakistan and Pakistan Television (PTV)

Speaking at a press conference, the minister said that as the national broadcaster, PTV was supposed to be the voice of the state and part of the national identity.

She highlighted that PTV Sports was the only steady revenue stream for PTV, apart from the Rs35 licence fee, paid by the people of Pakistan in their electricity bills.

However, PTI’s disdain for the broadcaster was evident from the fact that not only did their people storm PTV headquarters during the sit-in of 2014, but Imran Khan had congratulated his team and workers over the act.

Soon after coming to power, the previous government’s information minister regularly talked about closing down both PTV and Radio Pakistan, and converting their historical buildings into commercial entities.

“There was a conspiracy to shut down the state-owned television by making it financially bankrupt,” she said.

“One of the tall claims made by the PTI government after coming to power was that they wanted to convert PTV and Radio Pakistan into smart national broadcasters, on the pattern of the BBC,” the minister said.

But instead, she said, after coming into power her government discovered gross misappropriation in PTV Sports, a key aspect of which was the illegal allocation of rights to air cricket matches to a private media network.

She said that the current government had set up a fact-finding committee in April to probe into the matter.

She disclosed details about the agreement between PTV, MGroup and ARY, allowing the private channel to air cricket matches in the country. Until September 16, 2021, these rights were with PTV Sports.

She informed that the deal was framed and tailor made in violation of the rules. When asked what would happen to those who had framed the deal, the minister said that cases have been filed with the Federal Investigation Agency and that PTV along with her ministry, was working to have the deal voided.

All the officers involved in the corrupt deal have been transferred, and the services of those found guilty will be terminated, she said.

Separately, the minister also chaired a consultative meeting with representatives of journalistic organizations on Saturday, which was convened to address the two main components of fake news; ‘misinformation’ and ‘disinformation’.

The meeting was held in the light of an agreement between a Joint Action Committee of media organizations and the government over legislation to curb fake news.