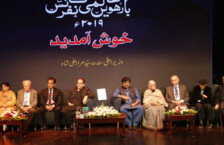 For the past many years in Pakistan, we have not produced a single body of work which could stand out in any field of social sciences. There are, obviously, noted social scientists in Pakistan who are doing their bit but how could we deny the fact that no discipline of social sciences ever progressed in our country in a way that could result in the generation of big ideas and theories acknowledged by great minds of the world.

Resultantly, we are bound to make analysts our opinion leaders instead of social scientists, we are surrounded by clerics instead of religious scholars, and we are producing engineers in bulk while scientists are hard to find.

These views were expressed by poet and author Harris Khalique who was addressing a jam-packed audience at the inaugural session of the 12th International Urdu Conference at the Arts Council of Pakistan on Thursday.

Only literature appears to be our last hope in a country where digital surveillance has come as the last nail in the coffin of personal privacy and freedom of expression, said Khalique, who is also the secretary general of the Human Rights Commission of Pakistan.

“If an opinion piece is subjected to censorship today, fiction will be the target tomorrow,” he warned literary scholars and poets. Khalique urged his fellow authors to speak out against censorship.

Referring to the famous debate of Adad Barae Adab (literature for literature’s sake) and Adab Barae Zindagi (literature as a true chronicle of life), he quipped that the debate could only continue if “human life survived in our country”.

Khalique ended his speech with putting some questions to literary scholars and poets. One burning question was that if they remembered the incident of Baldia factory fire, in which around 300 people were killed in 2012 in Karachi.

Quoting George Eliot’s words that ‘art is the nearest thing to life’, he called upon poets and authors to make a common man’s grief a part of their creative endeavours.

Sindh Chief Minister Syed Murad Ali Shah was the chief guest of the inaugural session. He lauded the Arts Council’s management for successfully organising the moot since the last 12 years.

Particularly, he praised the Council’s decision to include for the first time sessions on the country’s regional languages to highlight their literary works.

“May our politicians learn from our literary scholars how to work together,” he said, lamenting that politics had become divisive in Pakistan. “We should recognise political diversity the way we acknowledge cultural diversity,” he stressed.

At the end of his speech, the chief minister uttered a few sentences about his government’s development works in Karachi. As he finished his talk, a woman sitting in the Council’s auditorium shouted: “CM sahib! Karachi ka kachra uth-waaden [Dear chief minister! Get Karachi cleared of garbage]”.

The woman’s comment followed a huge round of applause and the hall erupted in cheers. After a brief pause, the CM first blamed the city government, without naming it, for receiving “sixty to seventy billion rupees annually” but failing to clean the city. He, however, admitted that it was a collective failure, too.

Presiding over the conference’s second session which commemorated Mirza Ghalib’s 150th death anniversary, Hanafi said Ghalib was the only poet in Urdu who was among the greatest poets of the 19th century.

“He is the poet of all – from a rickshaw driver who would know him as Chicha [Uncle] Ghalib to a novelist like Manto who wrote script of a movie on Ghalib,” he stated.

Ghalib is the only poet of Urdu whose poetry had been translated to most languages, including Sanskrit, Tamil and Bengali, he said. “Ghalib liberated himself from all the barriers – be it faith, language or culture. That’s why his poetry is universal.”

The following session featured Zia Mohyeddin’s recital of Ghalib’s poetry. In the last session of the day, poets and literary scholars reminisced about Fahmida Riaz, a progressive Urdu poet and author, who passed away last year in November.

The conference will feature a number of sessions today, tomorrow and on its last day on Sunday.

The News International
Related Stories
The Nation: Culture harmony in Pakistan stronger than any country in world: Murad