Mangrove trees to be planted on over 12,000 acres along Sindh’s coast | Pakistan Press Foundation (PPF)

Mangrove trees to be planted on over 12,000 acres along Sindh’s coast 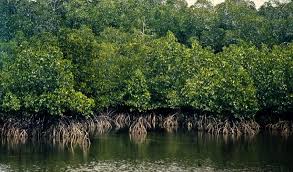 The Sindh Coastal Development Authority will plant mangrove trees on further 12,500 acres on the coastline of the province to protect the environment of the coastal areas and conserve the marine ecosystem.

The meeting was also informed that palm oil trees would be planted on one million acres land to meet the requirement of the edible oil consumption in the country. Indigenous palm oil production in the country would help Pakistan save up to three billion that was spent every year on import of palm oil from Malaysia and Indonesia.

Saeed informed that the CDA had established five jetties along the coastline and five more jetties would be constructed to assist fishermen community of Sindh, and the authority would also establish community centres in the coastal towns to help the fishermen in their social activities. The model villages would be established with the facility of separate schools for boys and girls and small roads would be constructed to connect coastal villages with each other.

The environment minister said that the coastal areas of the province were being developed to promote tourism. He said the areas were already producing natural gas as it was now hoped that oil would also be explored near the shoreline.