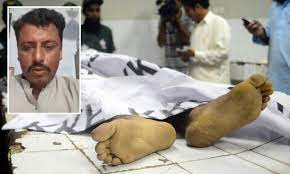 KARACHI: A young man was on Wednesday found tortured to death inside a Malir farmhouse, police and relatives of the victim said.

The incident enraged area residents and community members, who blocked the main National Highway and alleged that influential personalities were involved in the murder as the victim had made a video of some foreign hunters in his village in Thatta district recently. Later, the victim had also recorded his own video saying that his life was in danger because certain elements were threatening him. He had asked authorities to put his video on record, his relatives said.

Memon Goth SHO Khalid Abbasi said that at about 2.30pm on Wednesday the tortured body of Nazim Sajawal Jokhio, 30-35, was found “from Jam House at Jam Goth”.

He said he was beaten with clubs and punches during a scuffle/quarrel at Jam House and police took into custody two suspects — Hyder and Meer Ali.

Malir SSP Irfan Bahadur told Dawn that the body was taken to the Jinnah Postgraduate Medical Centre to fulfil medico-legal formalities. He also confirmed that two people had been detained for interrogation.

He added that they were waiting for relatives to lodge an FIR to formally initiate legal proceedings.

Additional Police Surgeon at the JPMC Dr Summaiya Syed said that there were ‘bruises and abrasions’ on the lower parts of the body. However, doctors reserved the cause of death.

Disputing the version of the police about the circumstances leading to the murder, the relatives and Jokhio community members of Malir and people of adjoining areas on Wednesday blocked the main National Highway near Gulshan-i-Hadeed.

They claimed that Nazim Jokhio was murdered at the behest of influential personalities because the victim had made a live video of hunting near his home in Jungshahi.

Victim’s Brother Afzal Jokhio, who is a former councillor, allaged an MPA and MNA of the ruling party were involved in the murder of his brother.

He told the media that his brother had made a video of hunting by the foreign guests of the lawmakers and broadcast it live on social media.

He said that he had to leave his brother there. He claimed that they were called for a patch-up.

Afzal said he reached his home late on Tuesday night when two persons belonging to Jam House — Wadera Mohammed Khan Jokhio and Wadera Ishaq Jokhio — informed him that his brother had died.

“My brother was subjected to severe cruelty and murdered,” said the grief-stricken Mr Jokhio.

He urged the Sindh chief minister and other authorities to provide him justice and arrest the ‘influential feudal’ allegedly involved in the murder.

The relatives also shared a video statement of the victim to the media on this occasion.

According to the video allegedly made by the victim before his murder, Nazim Jokhio said that he made a live video of hunting at 4pm. Some person had snatched the cell phone from him and beat him to keep him silent, but he was later given his phone. He said he made a phone call to Madadgar-15 but the police did not arrive. In the meantime, the hunters left the place. He said he visited the police station concerned and submitted an application about the alleged torture on him. Later on, he received threatening phone calls asking him to “delete the videos, otherwise you may face problem in the morning”.

Meanwhile, Leader of the Opposition in the Sindh Assembly Haleem Adil Sheikh on Wednesday evening visited the JPMC mortuary, met with the victim’s family and sought details from them.

Later, in a statement he urged the police to ensure arrest of the influential in the case