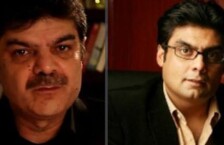 ISLAMABAD: The same anchorperson and the same TV channel owner once again put themselves at the court’s mercy when they were asked to present proof.

On November 28, they had sought the court’s pardon when the Lahore High Court grilled them for contempt of court as they had been maligning the honourable judges and the judiciary.

On Friday, ARY TV Chief Executive Officer (CEO) Salman Iqbal and anchorperson Mubasher Lucman agreed to tender an unconditional apology to the Supreme Court (SC) in a contempt of court case for maligning the judiciary while airing a programme.

Saying that they have committed a mistake, they prayed to the Supreme Court to have mercy on them.

It is worth mentioning that these people through their programmes had made it a matter of routine to slander the honourable judges of the superior judiciary and other people without any proof. They would wave some papers in the air — as if they had proof — and would mention Allah Almighty and the Holy Prophet Muhammad (SAW). They had also levelled baseless allegations against the Jang Group. A large number of people, including the Jang Group, had moved the courts against them.

The TV channel owner and anchor either did not appear before the courts or used delaying tactics to prolong the cases against them. They took long adjournments of cases against them. Had they been speaking the truth, they would have brought proof with them and ended the case in one hearing long ago.

On Friday, Mubasher Lucman and Salman Iqbal told the apex court through their counsel that they did not want to plead the case any more and were ready to tender an unconditional apology in the contempt of court case.

It may be mentioned that a three-member special bench of the apex court headed by Justice Ejaz Afzal Khan and comprising Justice Ijaz Ahmed Chaudhry and Justice Mushir Alam resumed hearing into the contempt of court case against ARY TV CEO Salman Iqbal and anchorperson Mubasher Lucman.

The court on December 2 directed Salman Iqbal and Mubasher Lucman to appear in person before it on December 12 for framing charges against them in the contempt of court case.

Irfan Qadir on December 2 filed an application of exemption for Salman Iqbal from appearing before the court stating that he was abroad for his daughter’s medical treatment after which the court had summoned him on December 12.

The counsel, however, apprised the court that both Salman Iqbal and Mubasher Lucman did not want to plead the case further and were ready to tender an unconditional apology to the court, adding that both had great regard and respect for the judiciary.

The court then asked the counsel to submit the written apology of Salman Iqbal and Mubasher Lucman before it. The court also directed the counsel that both Salman Iqbal and Mubasher Lucman should appear before it in person and submit an unconditional written apology on the next date of hearing and adjourned the hearing till January 5.