Malala Yousufzai’s biopic to have its premiere in London 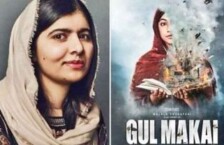 Bollywood film Gul Makai, which chronicles the life of Malala Yousufzai – the youngest Nobel-Laureate and an advocate for girls’ education – is all set to have its premiere in London on January 25, 2019, according to Entertainment Pakistan. The website also stated that Malala will be attending the premiere along with her family. Moreover, other personalities including Indian and Pakistani High commissioner and representatives of United Nations will also be attending the event.

The activist, who was shot at for defying the ban on girls going to school is also the UN Messenger of Peace. In 2013 she founded the Malala Fund, an advocacy organization to ensure girls’ education worldwide, while one of its initiatives Gulmakai Network supports the work of education champions across the world. Also, Malala used Gul Makai as a pseudonym when writing blogs for BBC Urdu.

Coming back to the biopic, which stars Reem Shaikh as Malala Yousafzai, the story is based on Malala’s journey from her days in Swat Valley to her becoming the youngest Nobel Peace Prize winner.

Directed by Amjad Khan and written by Bhaswati Chakrabarty, Gul Makai traces the then socio-political atmosphere of Pakistan and has an all star cast that includes Divya Dutta, Mukesh Rishi, Pankaj Tripathi, Abhimanyu Singh and Ajaz Khan apart from Reem Shaikh.