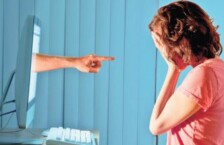 What do you do if your teenage daughter tells you someone is harassing her online? Do you tell her to ignore it, as you do when she harassed in real life just because you fear what people will say? What do you tell your son when he suddenly becomes depressed and aloof, jumping at the smallest noise? Do you allow him to stay inside his dark room poring over the phone and only react when he tries to slit his wrists? Cyber crimes against women are increasing. Over the last two years, we have seen a few cases being reported in the media in which young girls have been victims of cyber crimes. Some of these victims have reached out for help and the criminals apprehended; others have been hurt and some ended their lives because the pressure was too much to cope with.

Most of these girls were victims of cyber crimes like cyber-harassment and cyberbullying and their information and photographs stolen and used for blackmail.

Young people have enough to deal with and their lives are not any easier with the social media. We may think they have it easier than the generation before but that is not the case. The youth is no longer interacting and communicating like us, they do this in the virtual world. It sounds very sci-fi and maybe it is but life is not all rosy and beautiful. Women living in the virtual world are no safer like the real world. All the issues have only been translated online and have taken on more life than before, with longer and deeper consequences.

As a matter of fact, cyber crime is a global problem and it is affecting more and more people. Surprisingly, the age of the victims is as young as 15 years. According to UN Women, “One in 10 women in the European Union report having experienced cyber-harassment since the age of 15 (including having received unwanted, offensive sexually explicit emails or SMS messages, or offensive, inappropriate advances on social networking sites). The risk is highest among young women between 18 and 29 years of age.”

Statistics from a report released by FIA earlier in 2018 states that 90 per cent cases reported in Lahore were of women and most of these crimes had their origin on Face book. Most of the crimes involved photographs of the women that were taken from social media accounts and used to blackmail them. Digital Rights Foundation also reported that more women are victims of cyber crimes and it seems nothing has changed, only the way the criminals operate. Girls are just as vulnerable on social media as ever before mainly because like real life, even in the virtual world they are easy targets.

Some experts say the psychological impact of cyber crimes is greater than other crimes as the victim can live in constant fear and stress. Moreover, most of the time they isolate themselves suffering quietly. Many women are used to being quiet about their issues, as they have been doing so when they face harassment and violence in real life.

The relation of cyber crime and depression comes into discussion when someone ends their life.

Last September the sudden death of Pakistani model Anam Tanoli came as a huge shock to most. News reports revealed that Tanoli was a victim of cyber bullying. She seemed to have succumbed to this and committed suicide in Lahore by hanging herself from a ceiling fan.

Tanoli seemed to have her life all throughout and things seemed to be going well – she had recently returned from Italy after completing a fashion-designing course and she had a good modelling career. According to her family Anam was suffering from severe depression and was under severe mental stress. They had arranged for an appointment with a therapist but she ended her life on the very day of her appointment. Her death was clearly a case of suicide because of cyberbullying. This was revealed in a video that she had made a few days before her suicide in which she had addressed bullies. Wearing a yellow T-shirt that said, “Back off Bullies” she gave a strong message looking right into the camera as if talking to someone, saying, “Bullying is bad. Don’t do it, OK? It’s just a coward’s way out, and it’s a pathetic way out, quite frankly.”

Apparently, she was facing a lot of cyberbullying and had not known where to turn for help. She tried to tackle it through the video but failed and ended her life. If she was a victim of cyber bullying and harassment, those responsible are just as guilty of her death as if they were actually in her room when she committed suicide.

In a society that does not take depression seriously, it will take a long time for us to accept the dangers of cyberbullying and cyber harassment. But many experts around the world are accepting that cyber crimes are causing a rise in depression and harmful behaviour among the youth.

Similarly, women usually don’t know how to tackle cyber crime like cyberbullying and cyber harassing; those who do don’t do anything in fear of their families. This leads to women and girls becoming easy prey to sexual criminals who can steal their photos and videos and hold these as leverage to make women and girls do their bidding.

There is no doubt that a strong legal structure is needed to implement and review existing laws to tackle cyber crimes. But there is also a great need for a rethink of the social makeup in which families give girls more support and confidence to stand up to their harassers – online and offline – and see these perpetrators are dealt with properly.

We need to strive for a better world for the women on and offline. For a better society and for women themselves, they need to know about their rights as well as laws related to cyber crime so they can look for legal support and not take dire steps like committing suicide. Let’s work towards a safer virtual world for all, especially women.