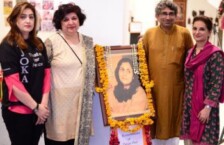 LAHORE – Ajoka’s three-day ‘Madeeha Gauhar theatre festival’ kicked off with a photographic exhibition in Alhamra Art Gallery on Thursday.  The exhibition titled ‘Madeeha Gauhar Retrospect’ showcased the unique and memorable pictures of the legendary artist during her four-decade long professional journey as a prominent theatre activist.

The exhibition includes memorable pictures of Madeeha Gauhar’s school, college, family life, collection of traditional crafts, tributes from near and far, awards and accolades, and dresses worn by the artist during her life. All the pictures and art crafts were beautifully displayed and audience showed great interest in the exhibition.

In the opening ceremony, a short documentary highlighting the personal and professional facets of Madeeha Gauhar’s life was also screened.  On the occasion, Ajoka’s executive director Shahid Mehmood said, “The festival is dedicated to a brilliant artist, who left behind a rich and vast legacy of socially meaningful theatre and art-based peace-building. Madeeha also inspired countless theatre activists and peace campaigners throughout Pakistan and beyond.”

He continued, “Madeeha directed and produced over 50 original plays during her career as a director which celebrated Pakistan’s rich cultural heritage and addressed sensitive, even tabooed subjects with sensitivity, courage and innovative direction. Plays also represent the richness of her directorial style ranging from folk-based story-telling to Sufi theatre and biting social satire.”

After the exhibition, famous flute player Akmal Qadri paid homage to the artist by his soulful performance.

After that Ajoka team presented the play “Kala Meda Bhes” which was based on a real life incident that took place in Sindh some years ago, where a woman was exchanged for an ox. Written by Shahid Nadeem the play takes place in a small village of the Cholistan desert where drinking water is scarce and a powerful and exploitative “Pir” controls the only well.

The play was not just a tale of woe and misery, but was also a tribute to the resilience and determination of the common people and is presented in the colourful and entertaining style of Swaang theatre, the most ancient form of theatre in Punjab. It also celebrated the rich and dynamic culture of South Punjab with dazzling costumes and delightful songs.

The festival is being organized in collaboration with Lahore Arts Council and will continue till Sept 29. Ajoka team will present cultural play “Lo Phir Basant Ayee” on Sept 28 (today).