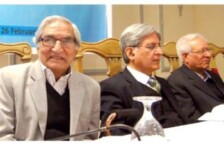 ISLAMABAD: In the preface of his book of Punjabi poems “Ajjay Qayamat Naeen Ayi,” accomplished columnist Muneer Ahmed Qureshi, or Munnoo Bhai as he is popularly known, writes that he has never claimed to be a poet.

But that does not change the fact that Munnoo Bhai is a masterful Punjabi poet whose simple verses hit the bull’s eye on the dartboard of sociopolitical commentary. Not many people can wear several hats with success and skill, but Munnoo Bhai seems to be a modern, creative polymath of sorts.

The 81-year-old is considered a brilliant Urdu columnist, perhaps the title that has won him the most admirers, a skillful playwright, an admired Punjabi poet, and a humble philanthropist.

Some of that brilliance and diversity was on display from the man himself and through his friends who spoke about him on Wednesday at an event organised by the Sustainable Development Policy Institute (SDPI). The evening was part of SDPI’s “Tribute to a Living Legend,” a series of gatherings to pay homage to Pakistani living greats.

The speakers, who were invited to talk about Munnoo Bhai’s life and work, appeared mesmerised by his personality, craft, wit and loving nature.

That effect apparently spilled over to spellbind the entire audience by the time Munnoo Bhai had read half-a-dozen of his poems, recounted some funny anecdotes from memory and issued a few wisecracks.

“All of my friends who have appreciated my work today were, in fact, appreciating themselves,” Munnoo Bhai said. “Because all that I have written, I have learnt from them. I have retold what I heard from my friends, my mentors, from their literature, from their experiences.”

He said he relied on realism for his writings since it is the “biggest glamour.” It was only when he realised he should write from a mother’s point-of-view did he achieve an accurate portrayal of the sorrows and concerns of the masses, he said.

Rasheed said he cannot come up with any words other than, “Munnoo Bhai is Pakistan’s history. He is Pakistan itself.”

Ahsan was also uncomfortable but managed to call out recent Pakistani dramas and political talk shows for their misogynistic content. He also lamented the dearth of analytical research in the country, which he said has prevented people from analysing the sociopolitical context of Munnoo’s poems.

Veteran poet Kishwar Naheed requested Munnoo Bhai to continue writing “because if we do not speak out [against oppression and conservatism], then who will?”

Writer and critic Fateh Muhammad Malik said if it had not been for Munnoo Bhai, whom Malik studied with in college in present-day Attock, he would not have been initiated in the literary tradition at all. Broadcaster Agha Nasir called Munnoo a “wizard of words” who writes from the bottom of his heart with love and truth.

SDPI Executive Director Abid Suleri said one proof of living nations is that they honour and respect the creative geniuses living among them. Suleri said Pakistan should also celebrate its greats and consider it a source of optimism in society.