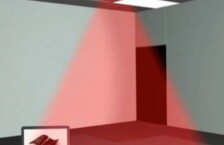 Two third of the total population in the world does not have access to internet, gaining access to internet by just turning on the light bulb will be more than just an achievement. Scientists of different countries have started research on this technology and it’s a very proud feeling that Pakistan has also started working on this technology. A student of CIIT (COMSATS Institute of Information Technology) Lahore department of computer science named Mashood Abbasi under supervision of Dr Saqib Rasool chaudhry also made a project on LIFI technology and it was presented in a exhibition which took place at COMSATS university Lahore. LIFI technology uses light bulb to establish data communication for data transmission and illumination simultaneously.

This technology is not costly as led of only Rs 1 used for light. It is an efficient and green technology and environment friendly too as it produces very less carbon emission as compare to routers and other devices. No external equipment is required and a bulb can be used for data transmission. However a lot of work is needed to be done on this technology. Aspects, such as security, video conferencing and enhancement in covered area are the main areas under consideration. Government and private sector should support research and development in these projects.