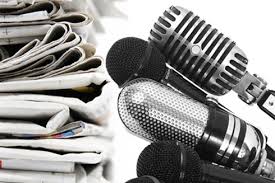 ISLAMABAD: The Pakistani media went berserk last week. ‘Patriotic’ anchors heaped scorn on Geo TV for its remarks about those in an agency held responsible in the wake of an attack on senior anchorperson Hamid Mir.

They were furious about the negative portrayal of those in the agency held responsible but oblivious to the growing concerns over threats to journalists from the intelligence agencies. Their debate was centered on the coverage of allegations against the responsible. Not a single segment, let alone complete programme, was devoted to a discussion of why journalists consider elements in the agencies a threat.

In a majority of the cases, the anchors were found hand-in-glove with the choice panelists. A dissenting voice would form part of the panel but only for the purpose of ‘flogging’ which was inevitable if one belonged to the Jang Group.

My personal experience was no different. One ‘patriotic’ anchor wanted my presence in his show but didn’t want to hear me. In a desperate attempt to make an issue out of nothing, he dismissed the Saleem Shahzad Commission report (demanding legislation for the intelligence agencies) on the grounds that it had wrongly alleged this correspondent of not recording his statement. (As a matter of fact, the then-PFUJ President Pervez Shaukat had conveyed my unwillingness to the commission to record the statement without even contacting me). I told the anchor that it was not the commission’s fault; our journalist representative fed them the wrong information about me but he was unconvinced and handed his own verdict that could discredit the commission report demanding laws for the agencies.

Another channel that invited me for a discussion on the issue censored when I demanded laws for the agencies and said that holding them accountable was the only way forward. The said channel also muted the voice of Kamran Shafi, who was a co-panelist. Even the conclusion of the talk show host, Absar Alam, was censored.

Air Marshal (retd) Shahid Latif regularly featured in the programmes on this subject. He would repeat two questions: (1) Why was the Jang Group against the defence organisations? (2) Why was it that journalists belonging to this group alone who felt threatened by the agency? I tried to answer his questions but it was a cry in the wilderness.

To his first question, I gave a personal example. I have been meeting Shahid Latif several times. He would discuss the issues relating to nepotism and lack of accountability in the defence organisations. Wasn’t he anti-Pakistan by that standard? He was not. Traitors are only those giving voice to the concerns raised by the likes of Shahid Latif.

What about Lt. Gen. (retd) Shahid Aziz who authored a book “Ye Khamoshi Kab Tak.” Any civilian author of such a book could have been termed a traitor, if not killed. Was Lt. Gen. (retd) Shuja Pasha wrong when he told the Abbottabad Commission that his agency had roughed up some ‘decent gentlemen’? Was it the right decision of Musharraf to tell the US channel, ABC TV, about the rogue elements within the agency?

His second question is equally important. Incidentally, he has been found raising this question during TV shows hosted by the channel which lost several employees to terrorism and the TTP had claimed responsibility for the attacks. Does it look good putting this question to the channel inquiring the reason for becoming a specific target of the TTP? By the way, an anchor of that channel had also echoed the same line taken by Shahid Latif. For their education, journalists of the Jang Group and other organisations are also facing similar threats from the agencies.

Rauf Klasra, a senior journalist, is not affiliated with the Jang Group. His recent column would make instructive reading for the likes of Shahid Latif. He should also ask Kamran Shafi, who is also a retired soldier, who had also blamed the agencies for firing at his home in 2010. Absar Alam is also not affiliated with the Jang Group. Azaz Syed was not with Geo TV when his house was attacked twice. Imtiaz Alam is yet another example. Saleem Shahzad is not alive to tell him why he had sensed danger and accused an agency of an attempt on his life. He was silenced through violence. Abdul Salam Soomro, a cameraman of a Sindhi TV channel who made the video of Sarfraz Shah who was gunned down by Sindh Rangers in Karachi, could also explain his threat concerns.

Let’s believe for a moment that Hamid Mir’s suspicion that an agency is involved is baseless. His vocal position on a number of issues earned him many enemies. It is quite likely that somebody else might have attacked him. However, the question remains as to why he considered the agency the main threat to his life.

Let’s suppose that my allegations about the agency’s involvement in my kidnapping and torture were wrong. But it will also have to kept in mind that my belief in this regard was strengthened with the passage of time. The more I interacted with informed persons the more they endorsed my view.

This perception among journalists regarding threats from the agency must be taken up as a challenge by the agency. Equally important is for the ‘patriotic’ anchors to take up this issue in their programmes. Among them are those who were harassed in the past, something they had been sharing. A debate about this negative perception is not going to malign the agency. It will herald a new era of trust with each other.

American journalist Tim Weiner’s book on the CIA — ‘Legacy of the Ashes’ — could not weaken the most powerful agency of the world; it was a litany of failure though. The book rather generated a new debate and triggered reforms making the agency stronger and better.

Note: This reporter and some other people were not allowed to speak. As the Jang Group is being incriminated, to educate people and give the reporter a full opportunity to be heard, it is necessary to publish this story. – Editorial Board