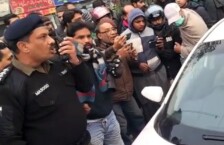 Police in Lahore on Wednesday claimed the arrest of a prime suspect for the murder of a journalist earlier this week.

According to police, the reporter, who was gunned down outside the Lahore Press Club, was killed because of a financial dispute with a jeweller in the provincial capital.

Law enforcers said they arrested suspect Amir Butt from a car showroom on Jail Road. The suspect is the proprietor of Gold Asia Jewelers, police said, adding that the investigation was underway.

Earlier, police had claimed that they had arrested three suspects over the murder of the journalist and had claimed they were contract killers.

According to police officials, Hasnain Shah was sitting in his car outside the press club when the suspects, riding a motorcycle, intercepted and shot at him, killing him on the spot.

Hasnain was a crime reporter for a private media house and also a member of Lahore’s press club.