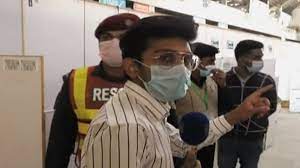 The Punjab government has indicated that it will quash the first information report (FIR) registered against SAMAA TV reporter Daniyal Umer for reporting ‘fake Covid vaccine entry’ in the name of late Kulsoom Nawaz in Lahore, it was learnt on Thursday.

The FIR was registered under Section 420 [cheating and dishonesty].

“Whatever happened with Daniyal Umer is condemnable and the FIR will be disposed of,” said a spokesperson for the Punjab government Hassan Khawar on the SAMAA TV program Awaz. “There is no censorship on any journalist in Punjab. We have never harassed any reporter, and we never will.”

The Punjab government, he said, encouraged reporters for investigative journalism so that the provincial government could address flaws in the system.

According to reports, the Covid vaccine, given under Kulsoom Nawaz’s CNIC number, was registered and administered in the name of a Lahore-based woman who was inoculated on October 5. While checking the system error, it was observed that the system replied ‘This citizen is not eligible for vaccination’ on multiple occasions. The first message was received by Daniyal Umer’s phone number.

The FIR, registered on a complaint filed by the deputy health officer in Mailsi, claimed: “Daniyal Umer has registered the CNIC number of a deceased woman. This is fraud and an attempt to degrade the system.”

“This story exposes flaws in the systems of the Punjab government,” said Daniyal Umer.

To verify the news, the Lahore-based reporter, Daniyal Umer, had sent a message on 1166 with the CNIC number of Begum Kulsoom Nawaz. According to the government record, Begum Nawaz, who had died on September 11, 2018, had been vaccinated with the first dose of PakVac-CanSino on October 5 at the DHQ hospital in Mailsi.

Earlier in the day, addressing a press conference, federal Interior Minister Sheikh Rasheed assured an independent investigation of the FIR.

“I will investigate this matter,” he said. “We should see the repercussions of such news. This will put a question mark on the vaccination status of other Pakistani citizens,” he added.