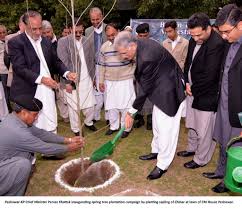 ISLAMABAD – The Khyber Pakhtunkhwa government is planting 50 percent Eucalyptus under its Billion Tree Tsunami programme, which will cause water shortage and threaten the bio-diversity.
Though termed it a green growth initiative of the Khyber Pakhtunkhwa government but the environmentalists consider the Billion Tsunami a green disaster which will cause severe water shortage in the whole country.

During a meeting of KP biodiversity action plan the officials of the forest department had no answer to the questions raised by the participants regarding the potential devastation the eucalyptus could cause, a participant of the meeting told The Nation yesterday. In the PC-I it was restricted that the number of eucalyptus will not exceed 10-20 percent of the plantation but due to unavailability of Pine and Acacia, it was decided to increase the number of eucalyptus to about 50 percent, an official involved in the monitoring of the Billion Tree Tsunami said.

“Isn’t it enough that eucalyptus will bring greenery to the province,” the official of the forest department told the participants. “Why you are so much concerned about the long-term water scarcity and biodiversity issues, a forest official was quoted as saying.

According to the research study, catchment experiment has shown that eucalyptus causes faster reduction in stream flow compared to pine. The study further found that stream flow reduction was significant from the third year of the planting eucalyptus and the stream dries up completely after nine years after planting.
Planting eucalyptus is not only unacceptable but also a direct threat to the country’s sustainable future. It will not only affect KP, but the rest of Pakistan because water shortage in KP will directly affect Punjab and Sindh, Abid Zareef, a member KP biodiversity group, said.

The question is why the PTI government chooses an invasive species when there were so many good native options available. Why they are not focusing on the native or environmental friendly species, he questioned. The answer is simple Eucalyptus is past growing, although invasive and in order to win the next election the PTI government probably doesn’t believe in sustainability and they want short term results, Abid Zareef said.

The damage may be irreparable; you have to choose between eucalyptus and drinking water in future, Zareef said.
The PTI-led government has started a plantation drive to plant billion tree in four phases in various districts of KP. The official who was not allowed to talk to media, said on the condition of anonymity that the whole province is divided in 28 divisions which include five watershed division and 23 territorial divisions.

Ironically, the official said, in five watershed districts they are planting eucalyptus which can neither stop soil erosion nor bring any positive environmental impact. However, it will destroy the biodiversity in those areas, the official said. The five watershed divisions cover Kaghan, Mansehra, abbotabad, shergarh and Buner.
“Green disaster, the impact of which may not be visible initially, will be only noticeable after couple of decades when it will cause significant decline in the water table,” Zareef said. Eucalyptus is an exotic plant species only meant to be grown in water log areas (to get access water) if grown in water scarce areas like Pakistan it will put a disastrous pressure on the available water resources.
There is no doubt that billion tree tsunami is a good step and, if properly implemented, would increase the KP forest cover area to about 40 per cent. However the project was derailed by bunch of ill advisors and shortsighted government officials, who are focusing on quantities instead of qualitative growth initiative. All the officials in KP government are talking about the increase in the forest covered area and enhancing greenery but no one tells you about the environmental impacts.

However, when contacted Shabbir Hussain, the Project Director of Billion Tree Tsunami, said that it is just a propaganda as the number of eucalyptus plantation has never crossed 13 or 14 percent of the total plantation.

He said that majority of government-owned nurseries has more pines
and less eucalyptus however the private nurseries have a lot of eucalyptus. Besides, Acacia is also being imported for plantation.
He said that worldwide there are 400 species of eucalyptus and in Pakistan they are planting only 16 species. He said that eucalyptus has the fastest growth and in 20 years farmers gets four generation of eucalyptus, while Acacia takes 40 years and Pine takes 100 t0 120 years to grow.

There are two considerations in planting trees – one is ecological and the second is economical, Shabbir said. As far as the government is concerned it is planting Pine and Acacia on the government owned land while the farmers prefer economically beneficial eucalyptus, he said.

On one hand the Punjab government is concentrating on planting Dalbergia (Sheesham) while the founders of new Pakistan are planting eucalyptus. 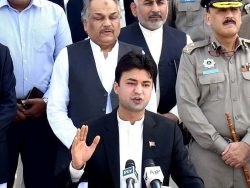