They are killing freedom of expression! | Pakistan Press Foundation (PPF)

They are killing freedom of expression! 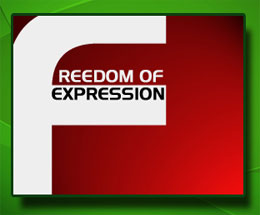 Evolving democracies like Pakistan have sharper contradictions between major power institutions. As it is a young democracy, the struggle between different power centres is noisy and dirty. At the same time, it is worrying for all democrats because democracy has been killed in its infancy many a time by military dictators. The present strain in the civil and military relationship has to be seen in this context. Democracy has evolved as the political superstructure of the capitalist economic system. The freedom that flows down to the people is from continuous struggle for power between powerful vested interest lobbies. The attack on Hamid Mir and the hysterical coverage of allegations by his channel are the microcosms of institutional infighting.

Even the recent example shows that each lobby needs the support of the people; for instance agencies engineering their support in the media and on the streets by some innocuous groups, political parties and banned organisations. The beleaguered television channel is also trying to woo the ruling party and professional journalists, besides appealing to the public. The people in turn should take sides keeping in view which power lobby’s success will give them more space and expand their rights.

There are lessons to be learnt by both sides from this conflict. First, let us take the media as it is better to start with self-criticism. Lesson one: responsible journalism is only possible when media practitioners keep their cool and objectivity while covering an event no matter how tragic it is. It is easier to be objective at other people’s expense but the real test of maturity is when the media is itself a victim. Second, journalists should keep a respectable distance from the agencies and religious and ethnic militant groups. These groups and agencies can be the source of a story lead, but journalists should keep their independence and objectivity. Usually, these powerful militant groups and agencies are harsh on renegades. The CIA’s term ‘burn the sources’ resonates in my mind.

For the powerful establishment the lesson is that times have changed and it is not possible to claim sanctity these days. They have seen that in the courts and hear it all the time in the media. The media and the superior judiciary do not spare even the president and the prime minister, so the civil and military bureaucracy cannot be above criticism. People who maintain that sensitive agencies should not be discussed and that it is not done anywhere should read a number of stories and books written criticising the CIA. Closer to home they should watch Indian movies like Rang de Basanti and the more recent Madras Café.

However, a more important thing to be discussed by the people is the narrowing space for freedom of expression, where freedom of the press is just a small part. Unfortunately, intolerance is rising by the minute in our country and the blasphemy law is being used by the extremists to silence those who do not agree with them. Brave Rashid Rehman was killed for defending a blasphemy accused. Some Station House Officer (SHO) in Punjab avenged his insult and got a stooge to file a blasphemy case against 68 lawyers who had protested against him. A teenager walks into a police station and kills an Ahmedi held on alleged charges of committing blasphemy.

All this should open the eyes of the rulers to notice how we are moving towards a state where dissent and debate are becoming difficult and the environment is suffocating. It is time to accept that Pakistan is an ailing state, which needs to be saved. A concerned NGO, the Pakistan Women’s Foundation for Peace, recently held a seminar in Karachi on ‘saving ailing Pakistan’. My submission is that the first step towards saving Pakistan is to accept that the state is ‘ailing’, perhaps a better alternate than ‘failing’. Next we have to diagnose what is the cause and not just tackle the symptoms.

Let us run some diagnostic tests and score the symptoms. Pakistan rates poor on the following in the Legatum Prosperity Index: rule of law, state security, national cohesion, smart power, positive projection of the country, health and population control. It scores average on the following five indicators of the index: governance, economic growth, democracy, personal freedom and national resource management.

The exception may exist for the military, which because of its organisational discipline and availability of substantial funds can perhaps score ‘good’. Yet, in spite of such a strong military, Pakistan’s internal security and national cohesion would score ‘weak’. Average ranking in most of the criteria means that Pakistan is a ‘borderline’ case and not a ‘failed’ state. Pakistan stands at 132 out of 142 states in the Legatum Prosperity Index. In the last few years, we have fallen from rank 107 to 132.

There are a number of factors that set the political, social and economic course of a country. These factors also explain a dangerous rise of religious extremism. We have to know why Muslims, who were a small minority of India that ruled most of the subcontinent for 650 years, were suddenly cured of their amnesia to realise that they were a separate nation. As India started moving towards self-rule, the basic demands of the Muslims were secular in nature: demanding higher share in jobs and assemblies in Muslim minority provinces and more autonomy for Muslim majority areas. These demands evolved and expanded into the claim for a separate homeland for the Muslim nation.

To achieve this goal, the All India Muslim League (AIML) exploited religion dangerously during the movement particularly after the 1937 elections defeat. The same religion, which was used as a ‘means’ to achieve the AIML objectives is today consuming Pakistan and the people are suffering from extremism, intolerance and terrorism.