Coke Studio 11 may well be the current subject dominating social media and making headlines online but drowning the noise for a minute, Instep can confirm that instrumental folk-rock music group Khumariyaan plan to release their debut album this year.

In between doing his day job as an architect and a runaround trip from Islamabad to Peshawar and back, Sparlay Rawail spoke to Instep before heading off to Paris with his music group for their European debut.

After making a smashing debut on Coke Studio 11 with two songs – the collaborative ‘Rasha Mama’ that also featured living legend Zarsanga and Gul Panrra and, later in the season with ‘Ya Qurban’, a band performance – they are going to Paris to perform at the International Conference on Pakistan Mountains on October 25.

As for what the conference will offer, noted the event’s website: “Speakers, conquerors of the impossible, winners of the summits and industry professionals will discuss their travels and expeditions to Pakistan, their experiences and stories, and compare their visions of opportunities and challenges. Finally, they will share with the audience what nourishes and animates their passion.”

“It still hasn’t hit me,” he says to Instep. What he is clear about is that the International Conference on Pakistan Mountains, organized by the Embassy of Pakistan in France and UNESCO, has accorded the band “immense respect” and have been “kind” leading to the band feeling “super happy”.

Though Sparlay Rawail, much like the rest of the band, is unclear on the status of the unreleased song Khumariyaan collaborated on with Ali Azmat, Abid Brohi and another band, the year has been a rewarding one.

As for their album, which was scheduled to release early this year, it got pushed back as the band got a call from Coke Studio 11. Being first-timers on the show and an instrumental one at that, the band was “super nervous” about their appearance and decided to do the show first. Now that Coke Studio 11 is done with, the band has a lot in mind.

They played a show in Islamabad, a small one for hardcore Khumariyaan fans, who Sparlay recounts to Instep, have been following the band for years. After the Paris gig, they plan to play a Salt Arts show in Karachi as well.

The real question, admits Sparlay, is not about releasing the album but how to do it. “The album, along with the artwork, has been ready for some time. Coke Studio 11 came along. Once we’re back from Paris, we will sit down and decide how to release it. Saif Samejo has released music. There are multiple ways. Customised USBs is another way to do it.”

On a parting note, Sparlay did confess that no matter the medium, the long-awaited Khumariyaan album will release this year. He also says that the Khumariyaan hope to release a music video with it and are creating hype for it by “telling fans at gigs that we’re releasing the debut album in 2018.” 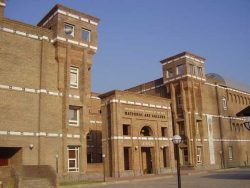