Keeping the press out 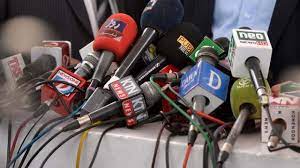 ON Monday, the government yet again displayed its rising contempt for the freedom of press — this time in parliament. When reporters arrived, by special invitation, to cover the joint session of parliament and President Arif Alvi’s speech to mark the new parliamentary year, they were shocked to find both the press lounge and gallery locked, apparently on the specific directives of National Assembly Speaker Asad Qaiser. Later, in an attempt to justify his action, Mr Qaiser stated he could not afford to have “two groups” fighting in the House and admitted to a ‘misunderstanding’. He was referring to a call for a symbolic walkout given by the Parliamentary Reporters Association to register their protest against the proposed Pakistan Media Development Authority. However, Mr Qaiser also asserted that the decision to lock the gallery had been taken in consultation with the PRA, a claim the body has categorically denied. The speaker’s actions have been roundly condemned for undermining press freedom. It is hard to recall when in the country’s history the coverage of parliamentary proceedings has been out of bounds for the press, perhaps not even in the dark days of military dictatorship. In fact, a look of utter bewilderment on the president’s face was apparent when he saw an empty press gallery during his address. Journalists later protested outside the speaker’s chamber. Another protest by the media was being held outside parliament against the PMDA.

Such a contemptuous attitude towards the media is hardly worthy of a democratic government that the PTI claims to be. That journalists have resolved not to take this attack on their freedom to write and report lying down shows how keenly aware they are of their own years-long struggle to break free from censorship and of the fundamental rights the Constitution gives them. In these times of political tumult and polarisation in society, an independent media is all the more necessary. It is time to let the journalists do their job.